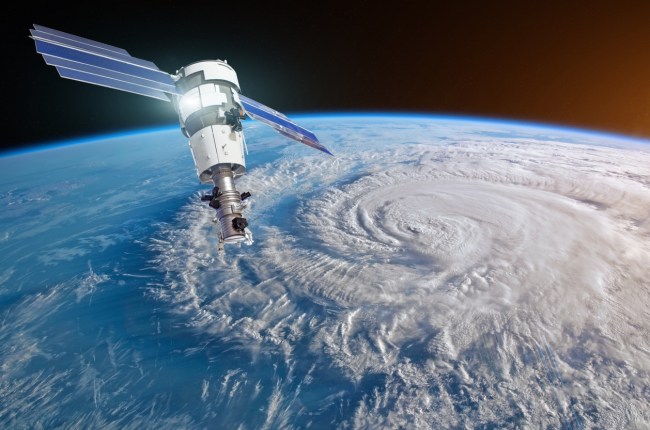 The heartbreaking images of the Bahamas being obliterated by former catastrophic Category 5 Hurricane Dorian are difficult to look at. People want to try to diminish hurricanes and typhoons so that entire islands are not destroyed. But is there already secret technology being used to control or manipulate the weather?

A wild conspiracy theory suggests that China already wields weather control technology that is powerful enough to effect dangerous typhoons. A recent weather radar reading appears to show China using something manmade to affect a typhoon and push the storm away from the mainland.

UFO-hunter and alien conspiracy theorist Scott C. Waring shared a video of what he alleges is weather control utilized by China. On his website UFO Sightings Daily, Waring claims that he has spotted something unusual and eye-opening in a simple weather radar clip.

“I was using a weather map radar and noticed some peculiar beams shooing from China and hitting the eye of the Typhoon heading towards us in Taiwan,” Waring wrote on his site. “This is 100% proof weather modification is being used…but is it to steer typhoons or does it actually create the typhoons? It probably can do both.”

Warring, who lives in Taipei, said that the “last seven typhoons that have come at us head on have all stopped abruptly just as it hits our shores…then either dies or changes direction.”

The post was made on September 6, so we assume the storm he is talking about in the article and video is Typhoon Lingling. If China was able to manipulate or turn away Typhoon Lingling, that is a remarkable achievement because the storm had a radius of 111 miles when it was close to Taiwan and had sustained winds of 90 mph and wind gusts of up to 111 mph.

RELATED: Florida Man Goes Viral With His Ideas On How US Military Can Fight Hurricane Dorian And It’s So Florida Man It Hurts

Weather maps show that Typhoon Lingling was on a collision course with Taiwan and headed towards mainland China and then it mysteriously went back to the sea. But once the typhoon moved north of the Chinese city of Ningde, which is where the alleged weather control rays were emanating from, the storm returned to a course of heading northwest.

While it sounds like a crazy conspiracy theory, China has openly admitted that they have invested a lot of money into weather control programs. In July of 2016, China’s Ministry of Finance announced that it had invested $30 million on a weather modification program to combat drought and reduce the impact of natural disasters. In 2017, China announced that it was investing $168 million into weather modification programs.

RELATED: Pentagon May Have Created Weaponized Ticks And Released Them Into The Wild

China even has a national Weather Modification Office, which enacted a program to prevent rain from falling during the 2008 Olympics in Beijing. The Chinese government used two aircraft and 20 artillery and rocket-launch sites to shoot silver iodide and dry ice into clouds. The silver iodide would induce the clouds to rain before they reached Olympic venues including the 91,000-seat roofless Beijing National Stadium, known as the “Bird’s Nest.”

“We use a coolant made from liquid nitrogen to increase the number of droplets while decreasing their average size,” explains Zhang Qian, head of Beijing’s Weather Modification Office.” As a result, the smaller droplets are less likely to fall, and precipitation can be reduced.” Qian said that “the results with light rain have been satisfactory.”

The U.S. government has also been trying to manipulate the weather for decades, sometimes even weaponizing the weather. Highly classified Operation Popeye was a weather control program that attempted cloud seeding in an effort to extend monsoon season during the Vietnam War to hinder and flood the Viet Cong.

The U.S. government experiment named Project STORMFURY also tried to seed hurricanes with silver iodide to make them less powerful. Testing was done from 1962 until 1983 with little or inconclusive results.

RELATED: US Navy Will Not Release Information They Collect On UFOs To The Public

Scientists are experimenting with trillion-watt lasers to control the weather.

“It’s experimental, however in the laboratory so far it works. When you have water vapor and you have dust particles or ice crystals you can precipitate rain,” respected theoretical physicist Dr. Michio Kaku told CBS News. “It condenses around the seeds. These seeds can also be created by laser beams. By firing trillion watt lasers you rip apart the electrons creating what are called ions and these ions act like seeds like dust particles bringing down rain and even lightning.”

Many conspiracy theorists believe the U.S. government uses a top-secret program named High Frequency Active Auroral Research Program (HAARP) to develop weather control. HAARP is not funded by a weather-related agency such as the NOAA, but rather the U.S. Air Force, the U.S. Navy, the University of Alaska Fairbanks, and the Defense Advanced Research Projects Agency (DARPA). This has sparked conspiracy theories that the U.S. government is attempting to weaponize the weather or use weapon warfare.

Recent major hurricanes such as Dorian, Florence, Harvey and Michael seemed to have stalled or moved at prolonged speeds. Research shows that there is an upward trend in North Atlantic hurricanes stalling. While scientists have not pinpointed an exact reason for the slowing of major hurricanes, there are some conspiracy theorists that suggest that the U.S. government is manipulating the hurricanes.