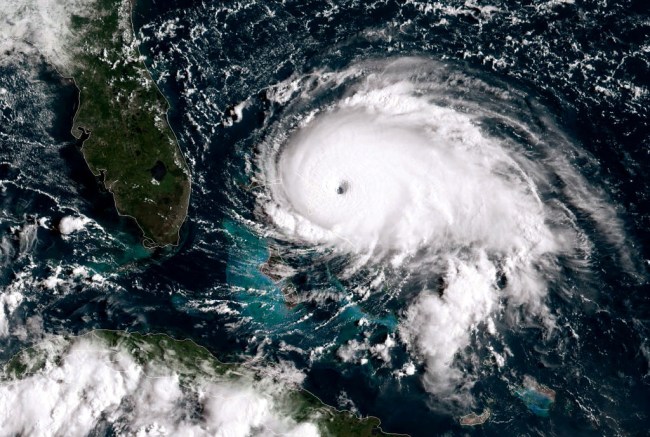 Hurricane Dorian is growing more and more powerful and has Florida in her sights as well as the Carolinas. But right now, the Bahamas is taking the first damage from the “catastrophic” Category 5 hurricane.

This view of Hurricane Dorian is unlike anything I have ever seen. 📷 NASA pic.twitter.com/ScbhTI9Gw3

Deep warm water in the Caribbean has fueled Dorian into being a Category 5 hurricane on the Saffir-Simpson Hurricane Wind Scale. Dorian is an “extremely dangerous” storm that has maximum sustained winds of 185 mph and wind gusts over 220 mph. The National Weather Service called Dorian a “30 mile-wide EF4 tornado.”

STRONGER YET: Hurricane #Dorian has been increased yet again to 185-mph (160-knots). This is the apex of hurricane strength — historically strong in the Atlantic up there with Camille and Wilma.

Dorian is making devastating landfall in the Bahamas now. pic.twitter.com/P8peSyMLCH

Dorian and its devastating winds made landfall on Elbow Cay in the Abacos Islands located in the northwestern area of the Bahamas, the National Weather Service said Sunday afternoon. Dorian is now the strongest hurricane on record in the Bahamas. Photos and videos show the tiny Caribbean island being pummeled by the deadly storm. Houses have been destroyed, roofs ripped off and cars destroyed.

View from Marsh Harbour, Abaco from parents house a few minutes ago. And not even hurricane force winds yet. pic.twitter.com/cTSecWKYVw

Marsh Harbour Abaco ppl trying to get out in trucks and tractors 🚜 🥺🥺🥺I pray they get to safety and my family is safe pic.twitter.com/PnnPzkhJSE

First video coming in from Bahamas after Dorian passed through and it's complete devastation https://t.co/8c91KTEBkU pic.twitter.com/LdvVQFstWY

More videos coming from the Abaco Islands from the devastations by Hurricane Dorian….this is complete heartbreak. Prayers to all. 😥🙏🏽 #hurricane #hurricanedorian #Bahamas #242 pic.twitter.com/lfvM4dzQtv

Residents in The Abaco Islands were rescued in Tractors 🚜 and Trucks in order to escaped from their residents safely. Prayers to all. 🙏🏽#HurricaneDorian2019 #Hurricanes #HurricaneDorian #Abaco #Bahamas #242 🙏🏽 pic.twitter.com/db4XGSyLfP

In one heartbreaking video, a mother with a 4-month-old baby pleads for everyone to “please pray for us, pray for Abacos. Please, I’m begging y’all, my baby is only 4 months old.”

One home was obliterated by the hurricane.

The Category 5 hurricane didn’t stop one person from going kayaking.

DEATH WISH? A kayak is not a safe escape vehicle during a Cat 5 hurricane. Wow. (Via James Julmis) #Dorian #HurricaneDorian #Dorian2019 #Bahamas pic.twitter.com/v0ejk6rRLH

“Life-threatening storm surge and very heavy rainfall also expected… Preparations to protect life and property should be rushed to completion,” the National Hurricane Center said in an advisory on Sunday.

We've seen an explosion of lightning within #Dorian's eyewall during the last 30-60 minutes. This is likely a reflection of the profound strength of the eyewall updrafts as the storm rapidly intensifies.

WOW! Rarely seen such an exceptional satellite view of the hurricane. A Category 5 hurricane #Dorian this morning. Images: NASA

Please refer the the pinned post for forecast details! pic.twitter.com/HYw66TdNVJ

Forecasters are predicting a storm surge of as much as 23 feet were possible, and 25 inches of rain could fall before the storm passes over the Bahamas.

We @WCKitchen are 80 miles from #HurricaneDorian eye & feeling this!! Imagine what the people of Abaco+Grand Bahamas will experience! Bahamas @opmthebahamas Goverment will need major help! @ClintonGlobal @RedCross @TeamRubicon …Florida should also get ready for major winds! pic.twitter.com/lIa9ghhUdk

Only one hurricane as strong as Dorian has made landfall in the continental United States, the Labor Day Hurricane of 1935 with 185 mph winds. Dorian now has the strongest winds for a hurricane this far north in the Atlantic east of Florida on record.

#HurricaneDorian is the 27th Atlantic #hurricane to reach #Category5 since 1950. Here's a table of the other 26 Atlantic Category 5 hurricanes with their lifetime maximum intensities. pic.twitter.com/22HqqBrY0n

Dorian is only the 35th Category 5 hurricane ever recorded in the Atlantic Ocean. Hurricane Dorian is the second-strongest Atlantic Ocean hurricane since 1950, only Hurricane Allen in 1980 was more powerful with maximum winds of 190 mph. Dorian’s 185 mph winds are the second strongest, tied with Gilbert in 1988 and Wilma in 2005.

Here is what Hurricane Dorian looks like from a storm-chasing airplane and from the International Space Station (ISS).

Cameras outside the International Space Station captured intense category 5 Hurricane #Dorian this morning from 260 miles above the Bahamas. Look in the eye and you can see the classic "Stadium Effect". Video courtesy of @NASA. #scwx #ncwx pic.twitter.com/byX9o6oDok

Still 48-hours of major hurricane conditions over the NW Bahamas.

The National Hurricane Center’s latest briefing on Dorian said the storm is expected to arrive in Florida by late Monday or Tuesday.

The hurricane will bring a “life-threatening storm surge” that “will be accompanied by large and destructive waves.” There are predictions that once Dorian hits Florida it could bring waves up to 60-feet high.

Maximum predicted ocean waves from Hurricane #Dorian will be 40-60 feet along the Florida coastline with 24-36 hours of continuous battering of the beaches.

As Dorian heads north, the largest waves > 80-feet will be on the eastern half of the storm. pic.twitter.com/Gw6n2mv0Oe

Experts believe that by Tuesday Dorian will weaken to a Category 4, with winds around 140 mph near the eye. Current forecasts show the center of the hurricane staying approximately 40-50 miles off the Florida shore, probably between West Palm Beach and Port St Lucie.

#Dorian has become the strongest hurricane on record in the NW Bahamas w/ winds of 180 mph!
***For Eastern NC: Regardless of Dorian's exact path, we are expecting heavy rain & gusty winds across the area starting Wed. Find #HurricanePrep tips at https://t.co/nPNQCZ0PE7 #ncwx pic.twitter.com/YIyIxcd7Ru

President Trump sent prayers to the people in the Bahamas and issued warnings for states in Dorian’s path.

Pray for the people in the Bahamas. Being hit like never before, Category 5. Almost 200 MPH winds.

In addition to Florida – South Carolina, North Carolina, Georgia, and Alabama, will most likely be hit (much) harder than anticipated. Looking like one of the largest hurricanes ever. Already category 5. BE CAREFUL! GOD BLESS EVERYONE!

President @realDonaldTrump: “I ask everyone in Hurricane Dorian’s path to heed all warnings and evacuation orders from local authorities.” pic.twitter.com/rg7uxs18GG