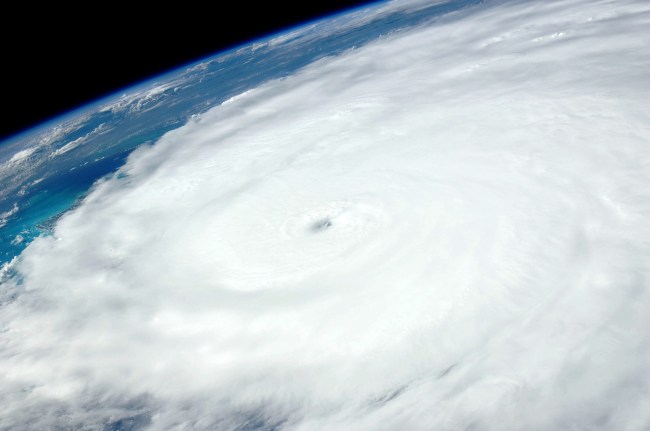 Hurricane Dorian has already obliterated the Bahamas, especially the Abacos Islands. Dorian has packed maximum sustained winds of 185 mph and wind gusts over 220 mph, making it the most powerful storm to ever make landfall in the Bahamas (Read more about that HERE). Hurricane Dorian is threatening to slam into the Southeast United States soon and people are petrified. Thankfully, one Florida man has an unconventional way to defeat Hurricane Dorian before it inflicts any cataclysmic damage.

We take you to a trailer park in Palm Bay on the east coast of Florida, where Dorian is expected to dump heavy rains, strong storm surges and gusty winds as early as Tuesday morning. One Florida man has devised an innovative plan to stop Hurricane Dorian dead in its tracks.

“I don’t see how they haven’t come up with some way to combat these storms yet,” the unidentified man in a Hawaiian shirt told Florida Today’s Tyler Vasquez.

“All this warm weather and warm water. We have Navy. Why don’t the Navy come and drop ice in the warm water so it don’t, so it can’t get going as fast as it’s going?” the Florida man explained.

The mastermind doesn’t stop at ice, but he should have.

From a mobile home park in Palm Bay, this man has some ideas on how the military could stop hurricanes. #HurricaneDorian pic.twitter.com/JAiFJ7QAOc

The Florida man with a thick New England accent shows that Peter Griffin is a real person and moved from Quahog to Florida.

I mean, if we bought Greenland, then we’d have enough ice to stop all the hurricanes, right?

To be fair to this gentleman who only wants to help, U.S. scientists have tried to use ice to try to stop hurricanes. The U.S. government experiment named Project STORMFURY proposed seeded hurricanes with silver iodide, which form ice crystals. The project was taken so seriously that testing was done from 1962 until 1983.

The government attempted to basically put ice in four hurricanes on eight different days to weaken wind strength. Winds did decrease between 10% and 30%, but scientists could not attribute the diminished winds on the icy experiment, but rather just a hurricane getting weaker.

The structure of seeded hurricanes did not change, prompting scientists to believe the silver iodide made no significant progress in weakening hurricanes. Scientists found that “hurricanes contained too much natural ice and too little supercooled water” according to the National Oceanic & Atmospheric Administration (NOAA).

As far as using planes to weaken hurricanes, the bold idea was actually pitched by University of Akron at Ohio professor Arkadii Leonov and his colleagues in December of 2008. Leonov’s team claimed that “because sonic booms spread out as they travel away from an aircraft, you might only need a small number of jets to stop a hurricane” according to Popular Science. “Two F-4 jet fighters flying at approximately Mach 1.5 are sufficient to suppress, mitigate and/or destroy a typical sized hurricane/typhoon,” Leonov’s team wrote.

But it isn’t just this Florida man thinking out of the box and developing unorthodox ways to combat hurricanes. President Donald Trump allegedly suggested nuking hurricanes (something that meteorologists and the NOAA have explored for decades). Then there were Floridians who thought that shooting guns at hurricanes was a way to stop raging storms.

In 2017, a Facebook event titled “Shoot At Hurricane Irma” went viral with nearly 30,000 people wanting to pop a cap in Hurricane Irma.

To clarify, DO NOT shoot weapons @ #Irma. You won't make it turn around & it will have very dangerous side effectshttps://t.co/CV4Y9OJknv

Dorian was a catastrophic Category 5 hurricane that has been reduced to a Category 4 hurricane as of 11 AM on Monday, still capable of immense damage with 165 mph winds. Dorian is taking her sweet time getting to the U.S. and it still thrashing the Bahamas by moving at only 1 mph.

After Florida, Dorian is forecast to go up the East Coast and slam Georgia, South Carolina and North Carolina with dangerous hurricane or tropical storm conditions.