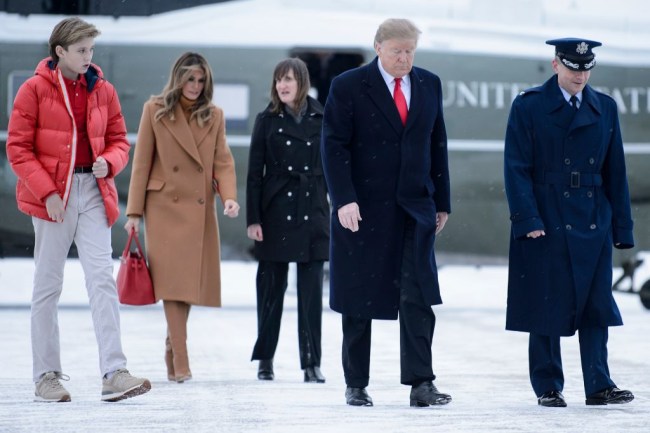 President Donald Trump is reportedly interested in purchasing Greenland. The POTUS is so intrigued with acquiring Greenland that he allegedly instructed advisors to investigate on how the U.S. could procure the frigid island in the Arctic and Atlantic Oceans.

The United States has made some extremely savvy land purchases over the years including the 827,987 miles in the Louisiana Purchase for $15 million, the 72,101-mile area of Florida from Spain for a mere $5 million, 529,189 miles in California, Nevada, Utah, and Arizona from Mexico for $15 million, the 591,000 miles in Alaska from Russia for only $7.2 million, and the Virgin Islands for $25 million from Denmark in 1917. But the United States has been relatively quiet in the acquisition of land, but that could possibly change under President Donald Trump.

At 822,700 square miles, Greenland is the world’s largest island because Australia and Antarctic are defined as a continent and not an island. Despite three-quarters of Greenland being covered by the only permanent ice sheet outside Antarctica, Greenland is abundant in natural resources such as minerals and offshore oil resources. Greenland would offer geopolitical and military advantages to the United States.

You people will make fun of it, but if we got Greenland, we'd have Russia surrounded from the east and the north pic.twitter.com/1cXinufEMc

Greenland is an autonomous country but is the property of Denmark. President Trump allegedly has had discussions with his aides about acquiring the Danish territory during “meetings, dinners, and passing conversations” according to the Wall Street Journal. Make Greenland Great Again.

This is not an outlandish idea, President Harry Truman attempted to purchase Greenland from Denmark in 1946. The U.S. offered Denmark $100 million to buy the large icy territory that has a small population of 56,000. Denmark declined the offer. In 1867, the U.S. State Department inquired about purchasing Greenland and Iceland from Denmark. The United States was playing Monopoly IRL back in the 1800s.

A Twitter poll with nearly 20,000 responses was overwhelmingly in favor of the U.S. acquiring Greenland.

Should the US buy Greenland?

The official account of the Ministry of Foreign Affairs for the Government of Greenland let the U.S. know that they were not for sale. Unfortunately for Greenland, they’re owned by Denmark, so it really isn’t up to them.

#Greenland is rich in valuable resources such as minerals, the purest water and ice, fish stocks, seafood, renewable energy and is a new frontier for adventure tourism. We're open for business, not for sale❄️🗻🐳🦐🇬🇱 learn more about Greenland on: https://t.co/WulOi3beIC

Michael Aastrup Jensen, a member of the Danish parliament, responded to the news of the U.S. wanting to acquire Greenland by saying: “The whole idea that another country could buy Greenland — like it should be a colony — is so strange to us.”

Former Danish Prime Minister Lars Løkke Rasmussen wrote: “It must be an April Fool’s Day joke.” Nice territory you got there, be a shame if the most powerful country on the planet annexed it.

The proposition of the U.S. acquiring Greenland started jokes and memes on Twitter.

My what a lovely meal and after-dinner walk. Why don’t I just go on Twitter to check out what’s happ— https://t.co/Zr0pKDCST2

[after closing deal] “what the-? why’s all this ice in GREENland?”

Greenland to the U.S., Alaska to Russia and Crimea to Denmark in a blockbuster three-team trade

IT’S CALLED GREENLAND BUT IT’S ACTUALLY COVERED IN ICE, UNLIKE ICELAND WHICH IS ACTUALLY VERY GREEN. ANYWAY, I’M GOING TO BUY IT pic.twitter.com/sD8apRzUb0

The Greenland Trump Tower and Casino will be the greatest Viking-themed casino in the world, many people are saying

Honored sirs, I am PRINCE KIELSEN and I am contacting you with exciting opportunity. I recently inherited an island but need a small amount of cash. Send a money order for $600,000,000 to my account and I will give you “Greenland.”

Is this what it would look like if America invaded Greenland? pic.twitter.com/d8ztmmPWLT

I think we should rent Greenland to see if we like it first.

Make All of Greenland America

THE DANES? WHO ARE A BUNCH OF TALL DOGS TO TELL ME I CAN’T BUY GREENLAND? pic.twitter.com/k08WQbw8oh

Strategically, Greenland is perfect place to launch a tactical nuclear strike on Canada.

But there were also people supporting the ambitious idea.

Uh, we should definitely buy Greenland. Have any of you looked at a map? It's like, gigantic. It's bigger than freaking Africa. pic.twitter.com/bfRw8VQHQ2

Then there was the idea that the U.S. could simply save their money and just take Greenland. Denmark, what are you gonna do about it?

Buy Greenland? When we can take it? pic.twitter.com/QfspvCbqXp

President Trump will coincidentally be making his first visit to Denmark next month. I can’t wait until Greenland is our 51st state.