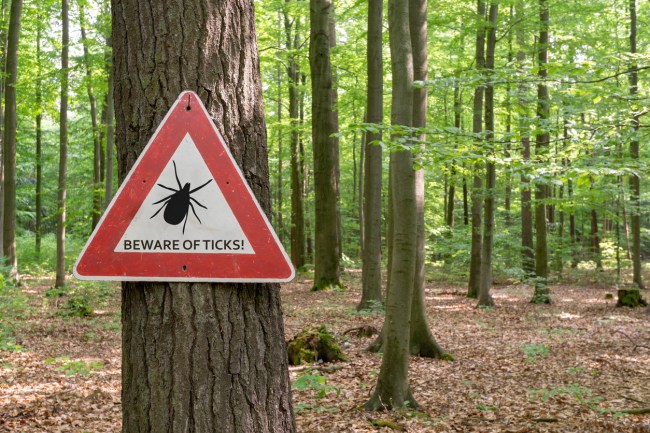 One day after we received word of Alabama meth gators, there is now the scary report that the Pentagon may have created weaponized ticks and released the dangerous insects into the wild. We’re talking about engineered biowarfare ticks created by the U.S. government and released on American citizens and now Congress is investigating this conspiracy theory.

Between the years of 1950 and 1975, the Pentagon was allegedly working on a biological weapons program at government facilities such as Fort Detrick in Maryland and Plum Island in New York. The program headed by the Department of Defense experimented on insects and even implanted diseases into insects to make them tiny biological weapons.

The program involved genetically modified ticks and the researchers wanted to see the potential for biological weapons through Lyme disease. The best-selling book Bitten: The Secret History of Lyme Disease and Biological Weapons that was published in May of this year, exposed the potential for ticks to be weaponized and spread Lyme disease.

Wilhelm “Willy” Burgdorfer discovered the bacterial pathogen that causes Lyme disease. In the book, Burgdorfer reveals his “secret role in developing bug-borne biological weapons, and raising terrifying questions about the genesis of the epidemic of tick-borne diseases affecting millions of Americans today.”

RELATED: This Devilishly Wicked Tick Is Spreading And Its Bite Can Turn You Into A Vegan

There have been theories that the tick-borne diseases from government agency programs have caused Lyme disease outbreaks to spread and possibly made the disease more dangerous because it was intended to be used in biowarfare.

Now, Congress is getting involved with the investigation into the weaponized tick situation. Last week, the House voted to require the Pentagon inspector general to inform Congress whether the Department of Defense created weaponized ticks in the United States. Rep. Christopher Smith (R-N.J.) wrote an amendment to the Fiscal 2020 National Defense Authorization Act, which would require the U.S. military to reveal if they developed biological weapons out of insects.

The amendment was introduced on July 11 and was passed by lawmakers the next day. The Defense Department Inspector General’s Office would head the investigation into the weaponized ticks. But there is also a chance that the government created other weaponized insects. Could you imagine government-created weaponized mosquitos or possibly even weaponized hornets?

RELATED: Man Died After ‘Rotting From The Inside Out’ And Had His Testicles Balloon From Eating A Gecko On A Party Dare

The United States House is especially concerned with whether the government released these engineered biological weapon bugs into the wild and if they are a threat to the American public. The Department of Justice will need to determine if the Pentagon released weaponized ticks into the wild and if it did it do so accidentally or on purpose.

President Richard Nixon banned U.S. government research into biological weapons in 1969, but experiments may have continued years after that according to Representative Smith told Roll Call. “We need answers and we need them now,” said Smith, who is a co-chairman of the Congressional Lyme Disease Caucus.

The Centers for Disease Control and Prevention say that there are between 240,000 444,000 people who tested positive for Lyme disease a year.

“We need to find out: is there anything in this research that was supposedly done that can help us to find information that is germane to patient health and combating the spread of the disease,” said Pat Smith, who is the president of the Lyme Disease Association.

Try to sleep tonight thinking about government-created weaponized ticks that may have been purposely unleashed on the public. Now we really need to see what the government is hiding in Area 51.

RELATED: US Air Force Gives Stern Warning To Anyone Planning To ‘Storm Area 51’ And ‘Stands Ready To Protect America’s Assets’