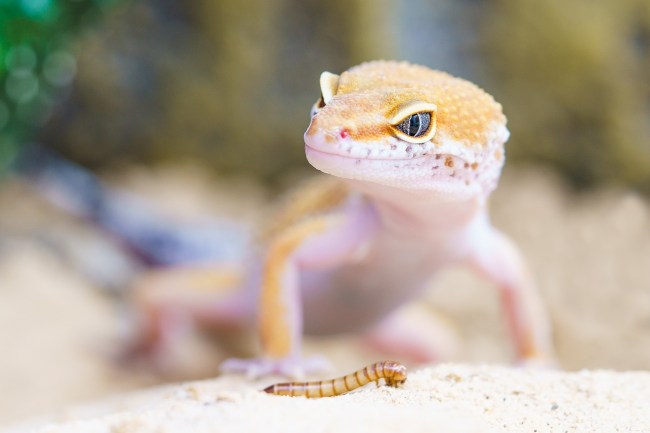 A tragic news story is coming out of Australia where a father-of-three died after eating a gecko as a party dare. The man’s family said he was basically “rotting from the inside out” and eventually died from the toxic animal.

David Dowell was at a Christmas party in December when a friend dared him to eat a gecko. David was never one to back down from a challenge so he ate the gecko on Saturday night.

A day after eating the gecko, David began to vomit green bile and his urine had turned to the color black. He became so badly bloated that he looked like he was six months pregnant. Dowell’s sister Hannah said her brother was in “absolute agony.”

Two days later, David was rushed to the Mater Hospital in Brisbane. Reportedly, paramedics originally believed Dowell was suffering from a stomach bug or a severe hangover and didn’t think he needed to go to the hospital. Allira Dowell, David’s wife of 15 years, assured them that this was way more serious and they agreed to take him to the hospital.

A day after being admitted to the hospital, doctors diagnosed Dowell with salmonella poisoning that they concluded was from foodborne bacteria and the symptoms include diarrhea, vomiting and fever.

It was then revealed that David’s lungs were filled with fluid. Michelle Dowell, David’s mother, remembered how much pain her son was in and said: “His testicles were swollen up to grapefruits and there was fluid leaking from them and they (doctors) said that was normal, it was just all of the fluid in his stomach cavity.”

Allira was searching for answers as to why her husband was gravely ill so fast. She was told by friends that David had eaten a gecko at the party and that could be the cause of his mysterious sickness. Apparently, there was drinking at the party and there were some people who said he ate the gecko, while others said he didn’t and it was all a joke.

“It was a dare, so he might have intended to eat it and then thrown it away,” David’s sister Hannah told the Brisbane Times. “At the end of the day, we don’t know whether he actually ate the gecko. David never mentioned it.”

Michelle begged doctors to operate and help alleviate David’s suffering. Doctors performed surgery but David died during the operation. David’s death came 10 days after the Christmas party where he allegedly ate the gecko.

A Queensland dad, who was known to never back down from a dare, was dared by a friend to eat a gecko at a party. He died 10 days later in "absolute agony". https://t.co/Sq2aGmQxd7

“The surgeon basically said that he needed that (surgery) straight away,” Hannah said. “We also asked why they didn’t give him a catheter and they said they didn’t think of that.”

“We had to ask for pain relief for David,” Hannah said of her brother’s condition. “He was put into a coma because they couldn’t control his pain. We never really got to say goodbye to him.”

Now Dowell’s family claim the doctors “didn’t really care.” “The moment he got moved into the intensive care unit, that’s when they got serious,” Hannah said.

“I want justice for David or just answers,” Hannah demanded. “You don’t ever think anything like this could ever happen to you and then it does.”

The hospital where David died issued a statement: “Mater offers its deepest condolences to the family of David Dowell. Dowell’s case was referred to the coroner, who determined Mater had provided appropriate care and no further action was required. Mater is unable to comment further on the case due to patient confidentiality.”

University of Queensland school of agriculture and food sciences deputy head Mark Turner said eating a gecko could be deadly. “It’s possible that if the gecko was eaten, as it was being digested, the salmonella was released, but I have never heard of anything like this before,” Turner told the Daily Beast. “It just goes to show that things as innocent as geckos can carry disease bacteria.”

RELATED: Man With The Last Name ‘Scott’ Saves Woman’s Life By Using CPR He Learned From Watching ‘The Office’

Australians are equating David’s sudden death to Sam Ballard, another man who ate an animal on a dare. A then-19-year-old Ballard was dared to eat a slug that was crawling on the pavement at his home in Sydney. The teenager ate the creature and soon developed severe pain in his legs.

Doctors determined that the slug infected Sam with rat lungworm, a parasite that usually leeches onto rodents, but slugs can also become infected if they eat rat feces. Doctors determined that Ballard contracted eosinophilic meningoencephalitis, a rare form of meningitis that negatively affects the fluid around the brain and spinal cord.

He fell into a coma for 420 days and when he woke had an acquired brain injury. Sam died last November, eight years after eating the slug on a dare.

RELATED: Coroner Says Woman Overdosed On THC But Experts Are Skeptical Of The First Marijuana Overdose