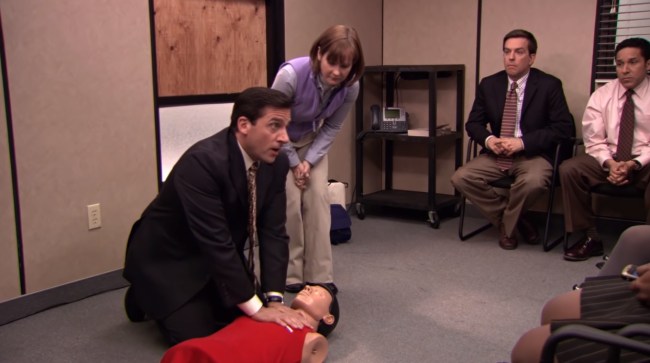 When your wife or girlfriend tells you to stop watching old reruns of The Office tell them to “go scratch” because your sitcom-viewing habits might save their life. Just like one man who used an important lesson he learned from watching The Office to save a stranger’s life.

We take you to Tucson, Arizona, where a man credits the 86th episode from Season 5 of The Office titled “Stress Relief” from 2009 as the sole reason he was able to perform successful CPR on a woman who was unconscious. On January 11th, a white sedan drifted onto the side of the road. The man, who is a lead technician at a nearby auto shop, noticed the car swerve off the road. He went up to the car and found the female driver unresponsive and slumped over the steering wheel.

He immediately put a rock in front of the car to keep it from rolling away and then broke the car window. Not knowing what to do, he did the first thing that popped into his mind — the CPR scene from The Office. The 21-year-old man had no formal emergency training so he remembered Michael Scott performing CPR from the hit sitcom. At first he was afraid, he was petrified, but he was ready to save her because she had all of her arms and legs.

He checked her pulse then started giving her CPR. No, he did not sing the Bee Gees’ Stayin’ Alive while carrying out the life-saving procedure. She suddenly vomited and started breathing on her own. That’s some “thank you” right there. Paramedics arrived 10 minutes later and took the woman to the hospital. Thank goodness the woman didn’t have an organ donor card.

RELATED: Tribute To The Best Toasts And Speeches On ‘The Office’ Is Michael Scott At His Absolute Best

The man who saved the woman’s life is named Cross Scott, the same last name as the Regional Manager of the Scranton branch of the paper distribution company Dunder Mifflin Inc., Michael Scott. No word on whether they are related or not. “I’ve never prepared myself for CPR in my life,” Scott said. “I had no idea what I was doing.” Scott later visited the woman in the hospital to check up on her. Life imitates art.

“If you don’t do CPR, that victim will die,” said Courtney Slanaker, executive director of the Red Cross Southern Arizona chapter. “Don’t be afraid to act. Whatever you do will help that victim and hopefully prevent a death.”

Thank our lucky stars that the helpful gentleman didn’t only remember Dwight Schrute’s knifing of the CPR dummy.

RELATED: This Horrifying Mashup Of ‘The Office’ And ‘Bird Box’ Will Make You Sleep With A Night Light Tonight