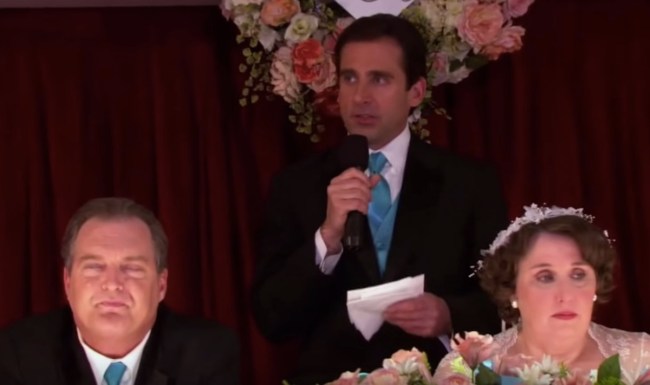 NBC’s The Office was always at its absolute best when the actors were given wiggle room to make the scenes their own. Nowhere was this more evident than the times when Steve Carell/Michael Scott was handed a microphone and allowed to get weird.

I remember listening to the episode of Marc Maron’s WTF Podcast where Mindy Kaling was the guest and being surprised by what she had to say about improvisation vs writing. Apparently, most of the moments fans would’ve assumed was improvised over the years was all just quality writing. Most of the cast stuck to the script with one exception.

Steve Carell is a master at improvisation and would often take over scenes and bring them to unimaginable new heights. I don’t know for certain that he’s improvising in these clips below from NBC’s official YouTube channel for The Office, but in this tribute to the best toasts and speeches, it definitely looks like things are going off the rails at times.

It really doesn’t seem like it’s been almost six years since NBC’s The Office was on TV and that’s primarily because there are almost always marathons on Comedy Central and the show can be binge-watched at any time on Netflix. It could also be because NBC is constantly releasing these supercut tributes to the Best of The Office on their YouTube channel. If you want more, check these out.