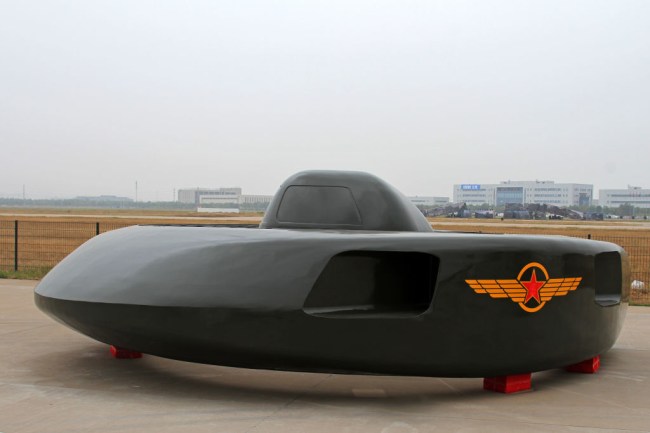 China has unveiled a new stealth attack helicopter that can reportedly travel at speeds of 400 MPH and fire missiles. The intriguing aspect of this Chinese attack helicopter is that it doesn’t have a traditional rotor blade or tail rotor. The design of this military aircraft looks exactly like a flying saucer UFO.

China has taken the wraps off of its latest military aircraft at the 5th China Helicopter Exposition in Tianjin. The Chinese media call the new chopper a “sci-fi-like aircraft.” The 25-foot-long, 10-foot-tall saucer-shaped attack helicopter is officially named the Z-20 and is nicknamed the “Super Great White Shark,” which kind of sounds like a SyFy movie.

Two aircraft accommodates two pilots in the cockpit and has a maximum takeoff weight of 13,000 pounds. The aircraft has a flying ceiling of 18,000 feet. The vehicle is definitely a military aircraft as “its fuselage is coated with stealth materials” and can be armed with missiles. China calls the Z-20 a weapon for the “future digital information battlefield,” and its small size gives it an advantage in hiding.

A 16-foot-wide rotor is under the aircraft for vertical lift and ducts on the side of the helicopter provide propulsion and maneuverability.

“Whether or not this particular helicopter can become practical, such explorations are beneficial to China’s technology development for future helicopters,” an anonymous military expert told the Global Times.

This is a to-scale sized prototype of the upcoming aircraft. The real and working aircraft will make its maiden voyage in 2020. However, Chinese military experts told the Chinese state-run Global Times that the “aircraft is highly experimental and may not be put into practical use anytime soon, it is beneficial to China’s technology development for future helicopters.”

Could this prototype be the cause of UFO sightings around the world? Could the Chinese military have been testing the capabilities of the aircraft’s stealth and is that the Unidentified Aerial Phenomena (UAP) that the U.S. military planes have spotted along the East and West Coasts?

The U.S. military toyed with a similar UFO-looking helicopter back in the 1960s. The VZ-9 Avrocar was a VTOL aircraft created by Avro Canada for the U.S. military, but the duct-propellor saucer that used a “turborotor” had very limited success because efficiency and power were horrible.