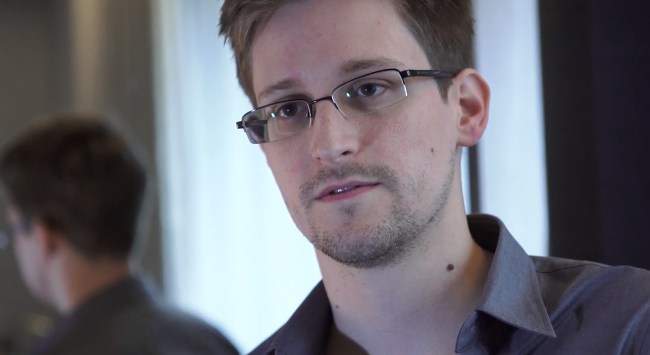 Whistleblower Edward Snowden had to flee the United States after going public with how the U.S. government was spying on American citizens as well as other people around the world. Snowden went on the Joe Rogan Experience and revealed that he searched the CIA’s computers for proof of aliens and UFOs.

In 2013, Snowden leaked highly classified information from the National Security Agency (NSA). At the time, Snowden was working at the Central Intelligence Agency and had access to government computers and networks. Besides leaking proof that the U.S. government was illegally surveilling Americans, Snowden also used his access to look for aliens and the truth behind Area 51.

“In the book, I talk about aliens and chemtrails and things like that, and the fact that there’s no evidence for that,” Snowden told Joe Rogan on Wednesday. “I went looking on the network. I know, Joe, you want there to be aliens.”

“I know Neil deGrasse Tyson badly wants there to be aliens. There probably are, right? But the idea that we’re hiding them — if we are hiding them — I had ridiculous access to the networks of the NSA, the CIA, the military, all these groups, I couldn’t find anything,” Snowden said. “So if it’s hidden, and it could be hidden, it’s hidden really damn well, even from people who are on the inside.”

“Everyone wants to believe in conspiracy theories because it helps life make sense. It helps us believe somebody is in control, somebody is calling the shots,” Snowden said. “There are real conspiracies, but they don’t typically have tens of thousands of people working on them, unless you’re talking about the existence of the intelligence community itself, which is basically constructed on the idea — I think there’s 4 million people in the United States who hold security clearances — that you can get all of those people to not talk, ever, to journalists.”

Snowden weighed in on the moon landing, climate change, and chemtrails. “In case you were wondering: Yes, man really did land on the moon. Climate change is real. Chemtrails are not a thing,” Snowden stated.

Snowden, who revealed the mass surveillance programs by the U.S. government, also told Rogan that the intelligence community could have prevented the September 11th terror attacks and instead used the period of citizens being paralyzed by fear to expand government powers of surveillance in the name of preventing a future 9/11.

“I saw something wrong. I saw that, basically, the government was violating the law and what I believed to be the Constitution of the United States, more broadly human rights, for everyone in the United States and around the world,” Snowden told Rogan. “There were domestic surveillance programs. There were mass surveillance programs that worked internationally. Basically, everything they could monitor, they were monitoring.”

Snowden also revealed how your smartphone is spying on you.

“Both Apple and Android devices, unfortunately, are not especially good at protecting your privacy,” Snowden explained. “If somebody sends you a message, the screen blinks to life, how does that happen? Every smartphone, every phone at all, is constantly connected to the nearest cellular tower, every phone even when the screen is off is screaming in the air saying: ‘Here is my IMEI!’”

“Every cell phone tower with its big ears is listening for these little cries for help and it compares notes with the other network towers. And that cell phone tower is going to make a note, a permanent record saying ‘this phone handset with this phone number at this time was connected to me,’ and based on your phone they can get your identity,” Snowden said. “The movements of your phone are the movements of you as a person and those are often quite uniquely identifying.”

Snowden was granted asylum in Russia after the U.S. State Department revoked his passport for leaking thousands of classified government documents. Snowden is currently promoting his book titled Permanent Record that was released last month.

You can watch the entire Edward Snowden with Joe Rogan below.