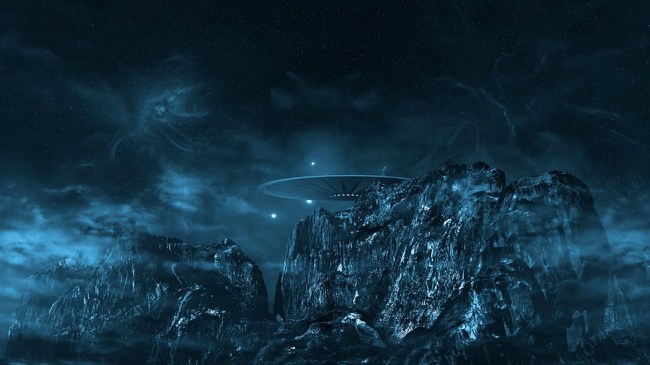 In case you haven’t been paying attention, and if not, shame on you, we are currently living in the golden age of UFO and alien investigations.

Recently, a UFO expert said he has “100% proof” that aliens currently live in a “city” on our moon. Just days before that, a red triangular craft was recorded hovering in the Texas sky in perhaps the “clearest ufo footage” ever.

We’ve also got Top Gun pilots telling the stories of their encounters with UFOs. And we’ve got former Blink-182 singer Tom DeLonge partnering up with the U.S. Navy, who finally admitted that the UFOs seen in viral videos are absolutely real.

Now we can add a filmed sighting of a fleet of UFOs spotted in the sky above Bountiful, Utah on October 10, 2019.

According to Scott C. Waring of UFO Sightings Daily, “The video clearly shows several glowing balls of light appearing next to one another. The objects do not fall and only move to the right, so that rules out military flares. The objects are huge, car size at least to be seen from such a distance…so that rules out drones.”

I observed a cluster of approximately 50 bright orange lights enter the atmosphere over the island in a southerly direction. I thought a large meteor had broken up in the atmosphere, but then they hovered in a cluster and changed direction toward the East. The cluster of lights disappeared and a bright, white light was left in their place hovering. I then observed several bright white lights blinking in a sequential pattern in a straight line as they hovered. I reached for my cell phone and was able to capture some of this amazing event. I did not capture the 50 bright orange lights on video but what I did capture is pretty amazing. Later, someone I told sent me a link to a video of a cluster of bright orange lights hovering over the ocean near North Carolina on the same day. I watched the video and observed that it was exactly what I saw during the initial sighting.

North Carolina is around 2,000 miles from Utah, 32 hours by car, but apparently not that far when traveling by alien spacecraft.

In the month before that, a shape-shifting UFO was spotted over Greensboro, North Carolina.

Related…
• Red Triangular Craft Recorded Hovering In The Texas Sky Is Perhaps The ‘Clearest UFO Footage’ Ever
• Top Gun Navy Pilot Describes His Incredible UFO Encounter On ‘The Joe Rogan Experience’
• A Strange ‘Fleet’ Of 14 Glowing UFOs Was Spotted And Caught On Camera Off The Coast Of North Carolina
• NASA Video From Apollo 15 Mission In 1971 Appears To Show Strange Alien Structures On The Moon
• Thanks To Former Blink-182 Singer Tom DeLonge, US Navy Finally Admits UFOs Seen In Viral Videos Are Absolutely Real
• Alien Expert Says U.S. Government Is ‘Silently Monitoring Snake-Like UFOs’ That Have Been Popping Up Everywhere
• Newly-Discovered Planet With Three Red Suns Could Be Our Best Chance To Find Alien Life