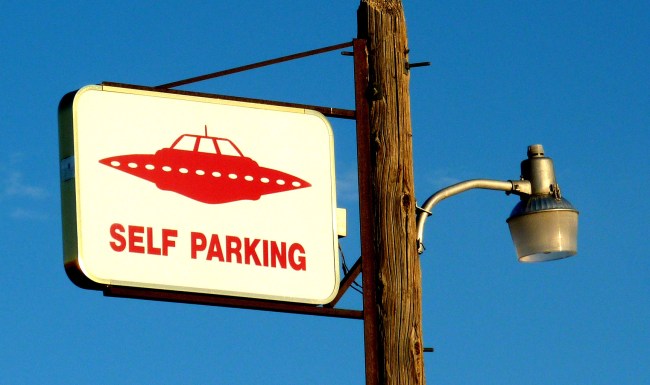 So how long do you think it will be before we finally get confirmation that all these UFO sightings are really aliens flying around in our atmosphere, if not living amongst us? Five years? Ten?

With all of the technology now available to everyday people it’s just a matter of time, right?

Throw in mysterious UFO sightings in places like Virginia, North Carolina, Oregon, Nevada, Missouri, Mexico, Ireland, Scotland, and other places over the past several years, and there’s got to be aliens checking out our planet, right?

The latest UFO sighting that has the tin-foil hat society all stirred up comes to us from the great state of Texas.

The video, shot by a woman named Jan as she was getting ready to go to work with her husband early in the morning before sunrise.

“It was red and you can see that it’s crystal clear – a perfect triangle in the sky – hovering stationary. That’s what she just said ther, ‘It’s hovering. It’s not moving,'” commented YouTuber MrMBB333.

“You can see something at the centre of this triangle that is moving around but the craft does appear to be red,” he added. “An incredible observation, a perfect triangle hovering in the sky.”

After enhancing the video, he points out, “You can definitely see some depth. You can see the edges are a little taller than the interior of the craft. “There’s something again in the middle. I don’t know what that is… appears to be, like I said, moving around maybe a little bit. I don’t know if that’s its energy source. Every once in a while you can see a corner, maybe it’s a light that kind of lights up a little bit. It’s like this thing is
phasing.”

Comments on the video were equally impressive.

“Our top scientists thought this would take a hundred to a thousand years and it took 10! Look up the truth!” said one commenter.

“That hover triangle emits some sort of energy field. You can see it,” said another.

“Oh, I’ve actually heard of these before on different forums! They will be accompanied by smaller vehicles-the triangles are airctaft carriers for the secret space program(SSP)! Anyone hear the same?!?” one person wrote.

One commenter says this isn’t the first hovering triangular craft they’ve seen, “The one I saw had a blue green center. Black triangle with green circular writing on the bottom in the center. It was hiding in a super cell and came flying out of the west heading east then made a sharp turn north flying low and fast and quiet and after a few short seconds it went back up into the clouds. This was right after a tornado touched down nearby a few years ago, and it was around midnight, and stormy. Scared the hell out of me. Hadn’t seen anything turn like that right above my head.”

Another wrote, “Our military has triangle ships now that they reengineered from alien craft.”

The best comment, and most accurate, however, may have been this, “This so far the best triangle craft video I have ever seen!”

One person commented that the red triangle is a “typical” TR-3 Black Manta surveillance plane that has been speculated to have been developed under a black project.

Could that be it?

One thing we do know for sure…