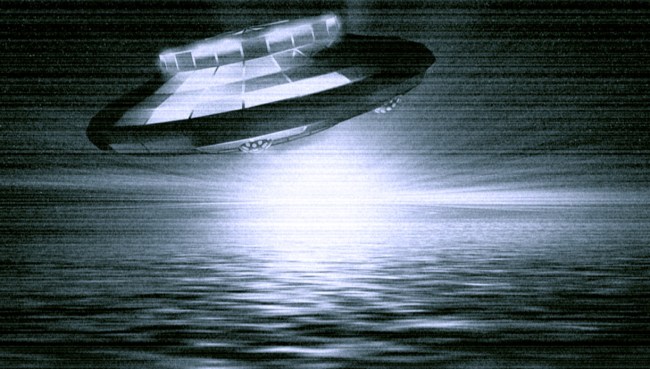 A man named William Guy was taking a ferry across the Pimlico Sound in North Carolina this week when he spotted something more than a little odd in the sky: a “fleet” of UFOs.

Before you scoff, you need to watch the video because aliens are totally real, yo. In it we see the sun is setting in the distance over the water, then Guy pans left across the horizon and there you go, UFOs.

“Look, nothing in the sky, at all,” he says at the beginning of the shocking video. “Then all of the sudden… BAM!”

Then as he focuses the camera to the left, Guy says, “What is that? Can anybody tell me what that is? We’re in the middle of the ocean, on a ferry. Nothing around, look… nothing around, no land, no nothing.”

So… can anybody tell me what that is?

According to The Daily Star, Guy also told viewers the lights disappeared before coming back around two minutes later.

What… is going on in North Carolina?

Last month there was a shape-shifting UFO spotted over Greensboro, North Carolina.

One viewer of Guy’s video suggested “the outer orbit of the Earth is swarming with alien advanced craft” and that “Earth is under heavy observation.”

While, another, more skeptical viewer (aka a non-believer) posited that the “fleet” of UFOs Guy spotted weren’t actually alien spacecraft, but rather may have just been training targets for military aircraft, but, hey, we all know…

Related…
• NASA Video From Apollo 15 Mission In 1971 Appears To Show Strange Alien Structures On The Moon
• Thanks To Former Blink-182 Singer Tom DeLonge, US Navy Finally Admits UFOs Seen In Viral Videos Are Absolutely Real
• Alien Expert Says U.S. Government Is ‘Silently Monitoring Snake-Like UFOs’ That Have Been Popping Up Everywhere
• Newly-Discovered Planet With Three Red Suns Could Be Our Best Chance To Find Alien Life