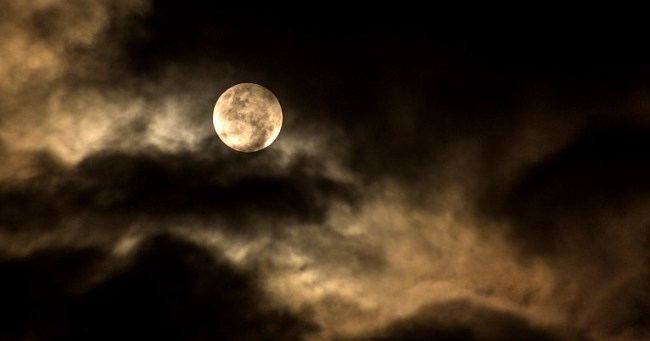 You know all those other abundantly credible reports we’ve shared in the past about aliens and UFO sightings? Like the one earlier this week about a red triangular craft that was recorded hovering in the Texas sky in perhaps the “clearest ufo footage” ever? Or that one about a Top Gun Navy pilot who described his incredible UFO encounter? Or that one last week about a strange “fleet” of 14 glowing UFOs that was spotted and caught on camera off the coast of North Carolina?

Yeah, well, those are all old news. The new UFO slash alien hotness right now comes to us from UFO and extraterrestrial hunter Scott Waring who has gone to painstaking lengths to prove that there is an “alien city” in an archived NASA photo of the Moon’s poles. Or as he puts it in his article’s headline: “100% Proof That Aliens Currently Live On Our Moon.”

“These alien structures are almost impossible to see, yet they are there,” says Waring, who goes on to prove his discovery by adding “a bit of shadows and the building’s shape and surface became visible.”

After adding the shadows, Waring points out something that is “like a giant alien air vent, leading to an alien base below the ground. It is not an air vent, of course, but is more likely a doorway.”

“Or it could be an entrance to some sort of space port,” he adds.

“When we imagine an alien city, we see structures like our own, but in 1 million or even 1 billion years are humans really going to make such structures or are we going to change everything about them?” Waring asked on his website. “Well, thats [how] technology evolves with a species. I mean it wasn’t long ago that the world once thought that the Sun revolved around the Earth.”

Needless to say, many of Waring’s YouTube followers were very impressed.

Viewer George Mair concurred, “An amazing find Scott it looks like a giant city of some sort? Definitely intelligently made structures?”

Don’t believe him? Take a look for yourself and always remember…

Related…
• Red Triangular Craft Recorded Hovering In The Texas Sky Is Perhaps The ‘Clearest UFO Footage’ Ever
• Top Gun Navy Pilot Describes His Incredible UFO Encounter On ‘The Joe Rogan Experience’
• A Strange ‘Fleet’ Of 14 Glowing UFOs Was Spotted And Caught On Camera Off The Coast Of North Carolina
• NASA Video From Apollo 15 Mission In 1971 Appears To Show Strange Alien Structures On The Moon
• Thanks To Former Blink-182 Singer Tom DeLonge, US Navy Finally Admits UFOs Seen In Viral Videos Are Absolutely Real
• Alien Expert Says U.S. Government Is ‘Silently Monitoring Snake-Like UFOs’ That Have Been Popping Up Everywhere
• Newly-Discovered Planet With Three Red Suns Could Be Our Best Chance To Find Alien Life