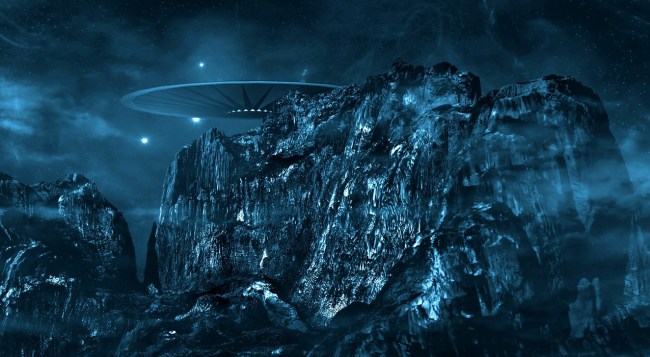 Every day we get closer to the truth, people. Now we have a report that over 100 people witnessed a huge UFO hovering silently over Menifee, California before speeding off into the sky.

Footage of this latest phenomenon first appeared on the internet in a video on December 3rd. The clip has since been viewed over 158,000 times on YouTube.

“Over 100 witnesses seen [sic] this giant craft flying over Menifee, California,” the video’s description reads. “This craft or crafts made no noise, whatsoever. At one point, the huge UFO was hovering in the same spot for more than five minutes before it speeds off into the night sky.”

“What in the f**k is that?” asks one witness in the video.

“They are so high in the sky, they can’t be drones, they’re tiny, but that’s…” said another. “Dude, we’re all gonna die.”

“This is real. I saw those exact same lights off the coast of Venice Beach California around midnight,” wrote one commenter on the video. “Almost blinded me even though they were so far away. We are not alone.”

“Skeptics are immediately claiming this is a fake but you all forget, they are saying there are over 100 witnesses,” wrote another. “My brother saw one like this in Mesa a few years back. He’s a very logical psychologist.”

“You can get 10 drones, sync them together and control them all at once to look like one entity.
I’m not stupid Military, you aren’t fooling me,” someone else commented.

Many called the video a hoax or gave some “logical” explanation for it, but as another commenter wrote, “UFO activity is increasing so fast! The world is gonna get a big wake up call.”

Related…
• A stationary UFO recorded in the South Carolina sky sparks secret government surveillance theory
• Former head of MI6, who’s allegedly part of a secret global conspiracy on UFOs, says he believes aliens do exist
• UFO expert claims ISS video is ‘100% proof’ NASA, Russia know aliens visit the space station
• Bug expert declares there are insects on Mars and then suddenly deletes research after backlash
• UFO expert claims to have video proof of a fleet of alien spaceships passing by our moon
• 5 Navy veterans and new anonymous source who witnessed the USS Nimitz UFO incident come forward to reveal what they saw
• Retired Air Force Major says a space alien was shot and killed at a base in 1978, government covered it up
• US Navy pilot David Fravor who claims to have witnessed a UFO says the tapes of the encounter have disappeared
• Eyewitnesses spot identical fleet of UFOs in the sky over Utah and North Carolina in the same day
• UFO expert says he has ‘100% proof’ that aliens currently live in a ‘city’ on our moon
• Red triangular craft recorded hovering in the Texas sky is perhaps the ‘clearest UFO footage’ ever
• Top Gun Navy pilot describes his incredible UFO encounter on ‘The Joe Rogan Experience’
• A strange ‘fleet’ of 14 glowing UFOs was spotted and caught on camera off the coast of North Carolina