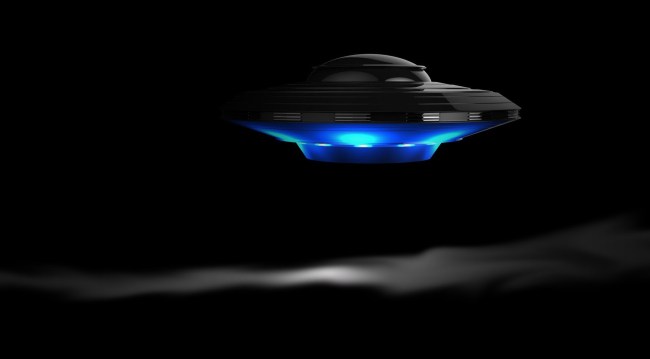 Fresh off news that the former head of MI6 John Sawers, who’s allegedly part of a secret global conspiracy on UFOs, saying he believes aliens do exist, comes yet another report of a mysterious unidentified flying object being spotted in the sky over South Carolina.

The video, recorded by Kymberleigh Jordan and shared by Nick Thomas TV, shows what looks like two crafts in the sky. One appears to be stationary while the other, while the other is presumed by at least one viewer to be “a government ‘spotter plane’ sent to investigate a potential UFO,” according to a report by the Charlotte Observer.

Video of a comet-like object reportedly seen over South Carolina has found its way to YouTube, resulting in a growing number of conspiracy theories about secret government surveillance of UFOs.

It shows something streaking across the sky, but the object appears to be stationary. Meanwhile, what seems to be a passing aircraft flies behind it, and their white trails cross about one minute into the video.

“Saw this on a drive in South Carolina. I have never seen anything like it before and would really like to know if anyone else knows what this is?” wrote Jordan in the video’s description. “I’ve seen falling stars, and they light up and disappear really fast. This object was moving, but barely. You can’t even tell it is moving in this video but it was moving downward very slowly. Another thing, if you look very closely you can see it is an object. There is an “eye” in this “comet.” And why did the plane travel behind it instead of in front? Does that mean it is in our atmosphere and that plane directly passed that object? I have so many questions.”

Nick Thomas, an expert on doomsday planet Nibiru, AKA Planet X, states in his analysis of the video that what he sees is “the planet with wings in the Nemesis System headed toward Earth.”

Makes sense. After all, who are we to argue with an expert?

Other comments on the video included speculation that it was space debris, a comet, a meteorite, a rocket on re-entry, one of the signs Christ warned us about, or just something as boring as a contrail illuminated by the sunlight.

Not everyone who watched the video agreed with Thomas, however, but as we are all well aware by now…

Related…
• Former head of MI6, who’s allegedly part of a secret global conspiracy on UFOs, says he believes aliens do exist
• UFO expert claims ISS video is ‘100% proof’ NASA, Russia know aliens visit the space station
• Bug expert declares there are insects on Mars and then suddenly deletes research after backlash
• UFO expert claims to have video proof of a fleet of alien spaceships passing by our moon
• 5 Navy veterans and new anonymous source who witnessed the USS Nimitz UFO incident come forward to reveal what they saw
• Retired Air Force Major says a space alien was shot and killed at a base in 1978, government covered it up
• US Navy pilot David Fravor who claims to have witnessed a UFO says the tapes of the encounter have disappeared
• Eyewitnesses spot identical fleet of UFOs in the sky over Utah and North Carolina in the same day
• UFO expert says he has ‘100% proof’ that aliens currently live in a ‘city’ on our moon
• Red triangular craft recorded hovering in the Texas sky is perhaps the ‘clearest UFO footage’ ever
• Top Gun Navy pilot describes his incredible UFO encounter on ‘The Joe Rogan Experience’
• A strange ‘fleet’ of 14 glowing UFOs was spotted and caught on camera off the coast of North Carolina