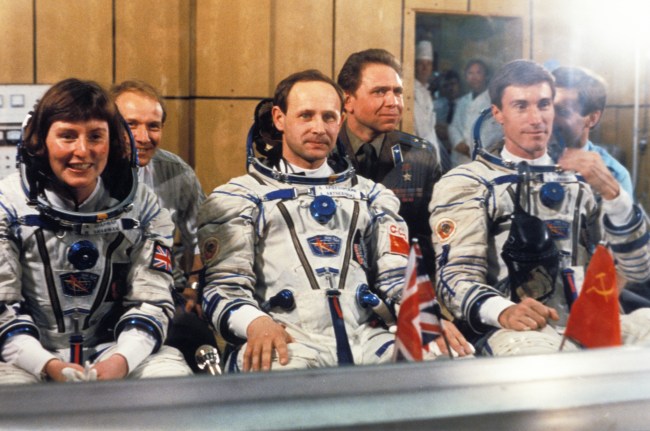 Aliens and UFOs used to be wild conspiracy theories that were only presented by people of questionable character and intent. Nowadays, there are credible UFO sightings such as the U.S. Navy personnel who were at the heart of the USS Nimitz UFO incident. Now, a British astronaut has proclaimed that aliens definitely exist, and there is a possibility that they are already living among humans.

Dr. Helen Patricia Sharman is an astronaut, which is a remarkably rare class of person since there have only been 565 people to have gone into space as of December 4, 2019, according to the Fédération Aéronautique Internationale (FAI). But historically speaking, Sharman is extremely exceptional since she is the first person from her country to become an astronaut.

Sharman became Britain’s first astronaut after she beat out nearly 13,000 other applicants to be part of a joint space mission by the Soviet Union and the U.K. known as Project Juno. On May 18, 1991, she blasted off in the Soyuz TM-12 along with Soviet cosmonauts Anatoly Artsebarsky and Sergei Krikalevin in an eight-day mission to Russia’s space station Mir. Sharman was only 27-years-old at the time of her space mission, making her one of the youngest astronauts of all-time.

Since Sharman is one of 565 people who have actually been in space, when she talks about aliens, her words carry more weight. In a recent interview with the Guardian, the astronaut was asked about extraterrestrials, and there was no doubt in Sharman’s mind that they exist.

“Aliens exist, there’s no two ways about it. There are so many billions of stars out there in the universe that there must be all sorts of different forms of life,” Sharman declared.

Sharman then explained that aliens could very well be on Earth right now. “Will they be like you and me, made up of carbon and nitrogen? Maybe not,” she said. “It’s possible they’re here right now, and we simply can’t see them.”

RELATED: Apollo 11 Astronaut Michael Collins Expects Humans To Live On Another Planet But Aliens May Determine Where We Colonize

NASA astronaut Leland Melvin said he saw “something organic/alien like floating out of the payload bay” during a space operation.

Also in the piece, Sharman said being a woman in the field of science and space exploration has not stopped her from pursuing her dreams.

“I’ve never defined myself by my gender, and I continue not to do so,” said 56-year-old Sharman, who is also a chemist. “People often describe me as the first British woman in space, but I was actually the first British person.”

You can read the entire article about Helen Sharman HERE.