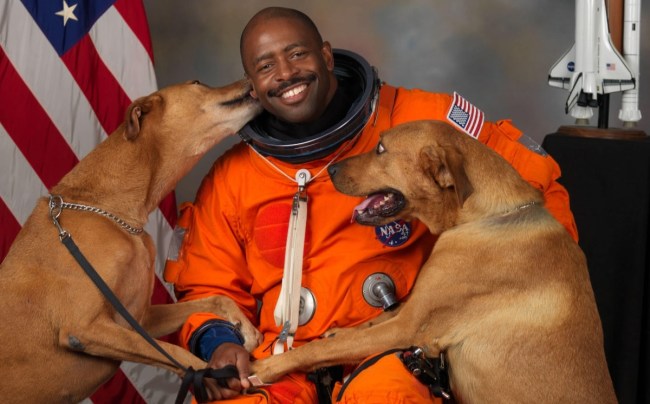 Everyone remembers Leland Melvin, he’s the NASA astronaut who famously posed with his adorable dogs for his portrait. The 54-year-old former astronaut hasn’t been on a space mission for some time, but he reveals that he did see “something organic/alien.”

Scott Waring, founder of UFO Sightings Daily, asked the question on everyone’s minds when given the opportunity to speak to an astronaut — Are there aliens? Melvin provided an answer that sent sci-fi enthusiasts into a frenzy.

The astronaut noted: “I have not seen one in space or on the ground.” Then things got interesting, “but thought I saw something organic/alien like floating out of the payload bay.”

Apparently, Leland wasn’t the only one who witnessed this space oddity because fellow astronaut Randy Bresnik also saw whatever it was. They contacted NASA as to what it could be and they gave them the boring answer of “ice that had broken off of the Freon hoses.” Leland added that the curiosity was “translucent, curved, organic looking👽.”

I have not seen one in space or on the ground but thought I saw something organic/alien like floating out of the payload bay. @AstroKomrade and I called the ground to ask what it could be and it was ice that had broken off of the Freon hoses.Translucent, curved, organic looking👽

Waring noted that Melvin would know what he was looking at more than ground control over 400 miles away and possibly NASA only said that to calm him down so that he could focus on his mission. Leland responded, “Hmmm. Don’t think so but you never know. 🚀”

It’s rather odd that Melvin, who has logged more than 565 hours in space, never saw this mysterious space ice before. If he did indeed see an alien, the only positive is that his last space mission happened back in 2009 when the shuttle Atlantis visited the International Space Station and no alien invasion has happened in that time. Yet.