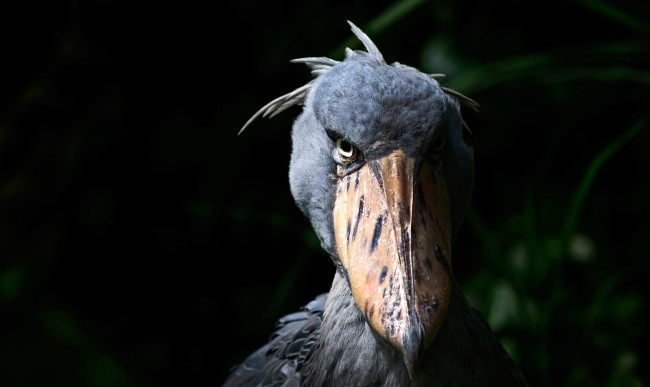 I mean, look at that photo up there. That is straight shudder-inducing.

Last year, actress Alyssa Milano made the Shoebill Stork go viral with a tweet in which she wrote, “Nope. Not ok with this.”

Nope. Not ok with this. pic.twitter.com/aN6uHi4Kmt

And now this week, you guessed it, the Shoebill Stork is going viral one more time. This time thanks to a guy named Jon who wrote alongside his video of a Shoebill, “I still have a hard time with this being a real bird & not something from ‘A muppets f***ing nightmare festival.”

I still have a hard time with this being a real bird & not something from 'A muppets fucking nightmare festival' pic.twitter.com/6sHVgvEnjK

This, sir, is most definitely a demon.

The article begins by asking if there isn’t a better name we could be using for this bird. Like Monsterface or Death Pelican.

While it poses no real threat to humans (sure…) the Shoebill is actually a pretty terrifying creature, and not just because it looks like a Muppet that was spawned from one of your nightmares.

The Shoebill will stand there, motionless as a statue, and wait for some poor lungfish or baby crocodile to swim by. Then the bird will pounce forward, all five feet of it, with its massive bill wide open, engulfing its target along with water, mud, vegetation, and probably any other hapless fish minding their own business. Clamping down on its prey, the bird will start to swing its massive head back and forth, tipping out whatever stuff it doesn’t want to eat. When there’s nothing but lungfish or crocodile left, the Shoebill will give it a quick decapitation with the sharp edges of the bill (because of course it does) and swallow away.

Sound terrifying? Yeah, it is. But it’s also impossible not to be impressed by these giants. Shoebills have been a beloved species for a long time. They appear in the artwork of the ancient Egyptians. Arabs reportedly called the bird Abu-Markhub, or “father of a slipper” (just can’t get away from that shoe imagery).

By now we must have hit all the things that are scary about the Shoebill, you must be saying. Sorry, but no. (Why would I even be writing these words if not to lull you into a false sense of terror completion?) Are you ready for it? They crap on their legs. Yep. They crap on their own legs because it keeps them cool. As with other birds, the poop is mostly liquid, and heat from warm blood passing through the legs is used to evaporate the liquid waste, resulting in cooler blood circulating through the stork. The science is fascinating, but when you get right down to it, this already mean-looking bird with a huge, clattering death bill now also has poop legs.

Oh yeah, they are also gigantic.

Have you seen them move a duck put of their way? pic.twitter.com/CI5PIJQc83

So, as you can see, it is perfectly fine to get freaked out by the Shoebill on Twitter at least once a year. The bird is a menace, as are these others that people shared in response.

This one will kill you! Modern day dinosaur pic.twitter.com/QORpChx63q

Have you seen a harpy eagle? pic.twitter.com/APTDHsytKB

The Potoo bird looks like it’s straight out of a horror movie pic.twitter.com/aLXVkaG3kI