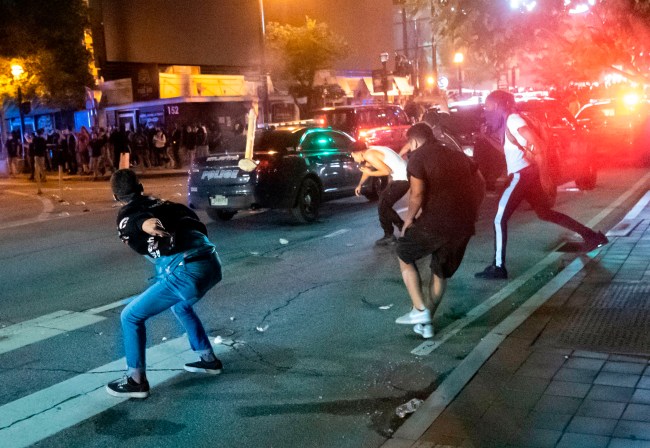 Following the death of George Floyd at the hands of Minneapolis police officer Derek Chauvin, many throughout the country have taken to the streets to protest police brutality. On Friday, massive protests formed in Atlanta which produced disturbing scenes coming from the area.

The front of CNN Center in Atlanta was the scene of violent protests on Friday evening that resulted in damage to the front of the building and inside https://t.co/Uz5PsPdoND pic.twitter.com/TsIsu9LCbn

HAPPENING NOW: Atlanta #protests in response to the #GeorgeFloyd killing have turned chaotic as police in riot gear are called in: https://t.co/LWmWiyII4D pic.twitter.com/T9ae1hLRAE

During the ATL protests, two tweets went viral that depicted alleged child soldiers with army fatigues, guns, and riot shields. These children were placed in front of stores and barricades but it’s currently unclear who they were with.

“…it remains unclear if the children, who appear to be varying in age, were deployed by an entity or if they were acting of their own volition.” https://t.co/r2GEzHFLR5

On the fourth night of protests, a video went viral of what appears to be four children standing in a line, wearing military apparel, and holding riot shields in Atlanta. Two of the older minors also appear to be holding batons. On social media, it was alleged the city deployed the children. But it remains unclear if the children, who appear to be varying in age, were deployed by an entity or if they were acting of their own volition.

It appears the state of Georgia, or someone with access to uniforms and guns, has deployed child soldiers to confront protestors in Atlanta.

This is child abuse.

Whoever is responsible must be held to account. pic.twitter.com/bpTFYGcmGA

Atlanta has deployed a child militia at Lenox Mall fitted with riot shields and batons. What the actual fuck is going on? pic.twitter.com/zTtmw5mDTN

We live in some strange times.