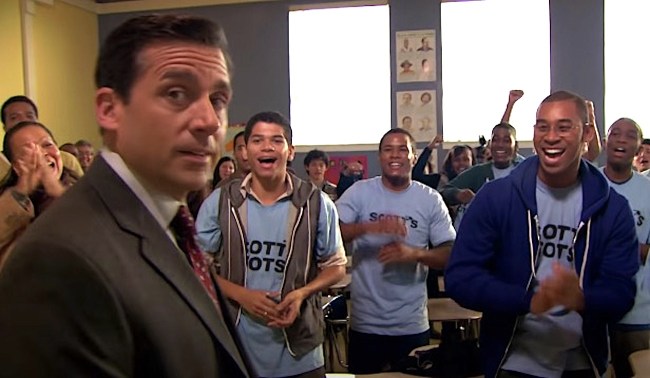 Of all the many infamous cringe-worthy moments in The Office, few of them have had the staying power of the climax of the “Scott’s Tots” episode, which sees Michael Scott fail to deliver on a promise he made to a group of young students.

During a recent episode of Jenna Fischer and Angela Kinsey’s Office Ladies podcast, B.J. Novak — who starred in the series as Ryan — opened up about directing the episode, which also marked his professional directorial debut.

In case you need a refresh, “Scott’s Tots”, the 12th episode of the sixth season, sees Scott suffering the consequences of foolishly promising to pay for the college tuition of an entire local third-grade class, which he utterly cannot afford now that they’re of college-age.

B.J. Novak on directing the “Scott’s Tots” episode of The Office

“You know, I was assigned the script, loved it, and it was only much later…I think it’s a sign of how deep into the show I was, or we all were, that we did not have a foot in the real world,” Novak began.

“Not that that was an unrealistic episode…that’s exactly what Michael would do. That’s exactly what Michael would feel. I also think that we can talk about it creatively. It makes a lot of sense to me. I don’t know if people are responding to — it seems like no one’s responding to it saying, ‘It’s a bad episode’ or ‘Michael wouldn’t do that.’ It’s more just like, ‘It’s so hard to watch.’ So it is consistent, I think, with the show.”

Novak then detailed why the “very difficult” moment is the epitome of Michael Scott as its born out of foolish generosity:

“It’s Michael — he got carried away with his generosity, with his belief in himself. I mean, maybe this is what people cringe about,” Novak said. “It’s a very, very lovable version of Michael Scott, as well as a heartbreaking version of Michael Scott. And it’s sort of the whole series in an incredibly distilled, uncomfortable way from the Michael Scott point of view when you look at it like that.”

“The British [version] had ended dark every time, more or less, and we had been ending dark every time, more or less. And so I guess ‘Scott’s Tots’ was definitely one of those [ones for us]. That is sort of this incredible distillation of why we love Michael so much and why he’s made everyone’s life so impossibly difficult, which is sort of the heart and the comedy of the series. But it’s not usually that intense, you know?” Novak concluded.

All of the seasons of The Office are currently streaming over on Peacock.

RELATED: The Most Expensive Scene In The History Of ‘The Office’ Was Just 52 Seconds Long