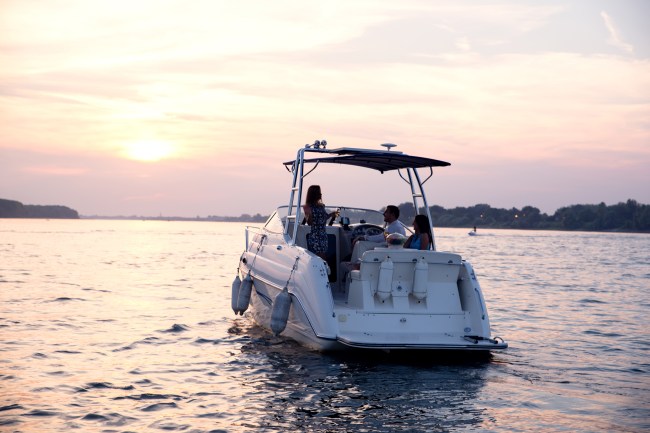 The fourth is almost with us, and with many of us heading to the beach to celebrate the birth of America, let this be a warning to anyone and everyone not be an asshole on the water.

If you choose to make America’s birthday about you, you could end up like this 39-year-old Michigan man who was arrested after he allegedly having too many pops and using his aluminum fishing boat as a battering ram against a luxury motor boat on Lake St. Clair.

Cellphone video captured Timothy Kennedy circling the boat like a shark before gaining momentum and drilling the much larger vessel from behind, damaging it.

The couple on the large boat, who do not want their identity revealed for fear of retribution, told WXYZ they do not know the man on the boat who attacked them and they were on their way back to the dock when they noticed him following them.

Macomb County Sherriff’s deputies arrested Timothy Kennedy of New Baltimore a short time later at Brandenburg Park around 6 p.m. The 39-year-old man was arraigned Monday on charges of operating while intoxicated and malicious destruction of property. He was given a $5,000 (10%) bond out of the 42-2 Court and is scheduled to be back in court on July 15.

Timothy Kennedy of New Baltimore was charged with operating while intoxicated after deputies said he rammed his fishing boat into a yacht on @lakestclair. @JennaWils live at 6. https://t.co/vd5YyQkntM pic.twitter.com/ApDs2VSbCU

For everyone else aside from Timothy Kennedy, have a bitchin’ fourth.