Chef Bobby Flay, Worth $60M, Is Getting Crushed For Asking People To Donate Money To Pay His Employees 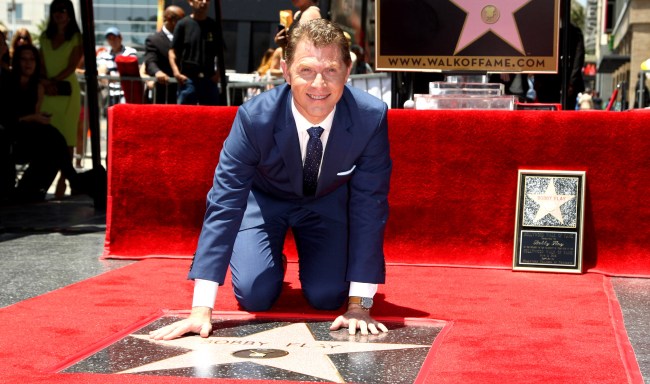 Apparently famous TV chef Bobby Flay doesn’t have the internet. I say that because how else does one explain, in this day and age, a man worth $60 million setting up a GoFundMe and then asking his fans to donate their money to him so he can pay his restaurant employees without taking the cash out of his own pocket?

Truly, I am not sure what’s worse.

Pharrell, net worth $150 million, asking people to donate to his GoFundMe for first responders. A good cause, obviously, but what is he donating?

Evangeline Lilly poo-pooing the whole pandemic like she’s somehow immune to the effect it’s having on everyone then taking a week to apologize?

Or Flay asking people who are worried about losing their jobs and/or income to donate to him so he doesn’t have to suck it up and pay his employees out of his own pocket?

I have to say, I’m leaning towards the latter.

Flay has since deleted the tweet after the onslaught of backlash he received, but the GoFundMe page is still active, because of course it is.

The loyal, creative and hard-working people of my fine dining restaurants are in dire need. The onset of this pandemic has literally crushed their ability to earn a living virtually overnight. Please find it in your hearts to give what you can. I will personally match up to $100,000. The teams of Mesa Grill, Bobby Flay Steak, Shark and Gato are the most dedicated workers in the hospitality business and many have been on board for decades. My heart is breaking for them. Please lend us a hand.

Thank you for the bottom of my heart.

Bobby Flay (literally worth $30m) is really fucking out here posting GOFUNDME INFO…. FOR HIS OWN EMPLOYEES.

We're the closest we've ever been to eating the rich. Bobby Flay went on a blocking spree after he posted a GoFundMe for his employees. That he laid off. He is a multimillionaire. The replies were BRUTAL.

Bobby Flay who is worth at least 60 million dollars tried to start a GoFundMe page to pay his layed off employees. Seriously that's fucked up

How about you pay them yourself greedy bastard, unlike you, we normal people are trying to survive through this so don't come here with your publicity stunt, and just sacrifice your millions for the people making you those millions

WOW thanks Mr. Flay for having someone else set up a GoFundMe to pay the wage you usually would while I'm urged by the government to not work! Enjoy your fucking hot tub. Cancelled.

Bobby Flay is worth $30 million dollars. He was sued in 2009 for cheating his employees out of tips and overtime. Now he’s trying to crowdfund income for his employees instead of paying them well. Rich people really are a different kind of ballsy. https://t.co/0W8OEGfLXT

Celebrity Chef @bflay has started a GoFundMe to ask strangers to pay for his out of work restaurant employees.@bflay is worth $30 million. Somebody needs to start a GoFuckYourself for him. pic.twitter.com/sNUI0luy5V

TIL Bobby Flay is a greedy POS

Bobby Flay a whole ass millionaire doing gofundme’s like he he can’t effortlessly take care of his employees salaries. Whew.

Caveat that these websites are often wrong/inaccurate but I still think safe to assume Bobby Flay is a multimillionaire who should be covering his own employees’ wages rather than begging for donations!

And he’s not alone in this behavior either.

Gordon Ramsey has laid off 500 staff. One of his chefs called him 'a little piece of shit' for doing so. Ramsey is worth £140 million. Another rich man who won't dip into his pockets to support his staff. 😤😠 pic.twitter.com/FPYKkSlAfy