Pharrell, Net Worth $150M, Is Getting Raked Over The Coals For Asking People To Donate To His GoFundMe 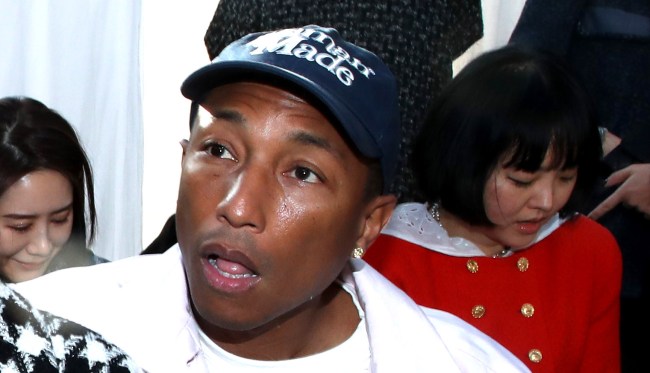 40,000 people are close to losing their jobs at Waffle House restaurants. The Cheesecake Factory can’t afford to pay its rent. And Pharrell Williams wants people to donate money to a GoFundMe account he set up for first responders.

While, in theory, this is a good idea, the fact that Pharrell is worth somewhere in the neighborhood of $150 million and is asking his fans to donate their money when many of them are wondering if they will have jobs in the coming weeks, this didn’t sit very well with many of them.

“Hospitals are running low on masks, gowns, and other critical items. We need to replenish their supplies,” Williams tweeted. “Take action, make a donation, and ask others to join the fight. We’re in this together. Let’s protect the responders on the frontlines.”

Hospitals are running low on masks, gowns, and other critical items. We need to replenish their supplies.

Take action, make a donation, and ask others to join the fight. We’re in this together. Let’s protect the responders on the frontlines.https://t.co/lfpBRWxUiw pic.twitter.com/hWWTwJhorY

He’s not wrong, but perhaps if he had made mention of pledging a sizable donation of his own people wouldn’t have responded like this…

I’m so tired of celebs tbfh

Imagine asking the people who most likely are being laid off right now, to donate, while you could just get your fellow celebs to raise money...🥴 pic.twitter.com/TOSkDcSgXe

You don’t have 10 mil you can spare and write off on your taxes? pic.twitter.com/2fl5Fa2zFq

we’re being laid off & can’t pay our bills but thanks for asking.

Us working clsss people are being laid of at extreme rates rn. And you’re asking us to donate? Ask 5 of your celebrity friends and their goal will be met

You literally live in a community college spending Kelis Milkshake royalty checks on Uber eats and you’re asking US TO DONATE !?!? pic.twitter.com/RrriCfDTLL

She’s referring to this.

So lemme get this straight. You are asking the millions of American who may not have a job right now to donate?! You're asking people who have an avg HOUSEHOLD income of less than $55,000 to donate? Am I getting that right?

you’re worth over $150 million, donate your own money

Don’t you have rich friends to send this link too??????

On the positive tip, many celebrities have been doing good with their money during this crisis.

• Conor McGregor has donated over $1 million worth of protective equipment to hospitals in his native Ireland.

• Russell Wilson and Ciara made a similar donation in the Seattle area.

• And Britney Spears, who’s worth around $60 million, is suddenly a communist.