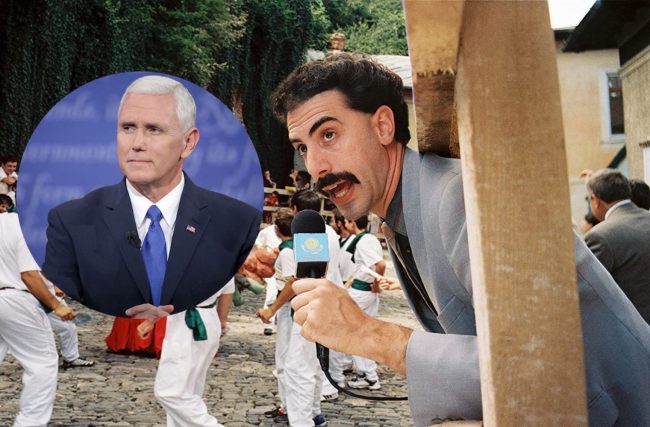 I’m now convinced: Sasha Baron Cohen definitely got someone BIG to do something very stupid in the upcoming Borat sequel. I just don’t see how anything else but that could be true.

As I’ve laid out in my various articles since the announcement of the Borat sequel, there are a multitude of factors that suggest Sasha Baron Cohen is cookin’ with gas and has something news-worthy up his sleeve.

First and most obviously, there’s a direct reference to Mike Pence in the title (although a rep for the film reached out to us to say that the title has since been changed and will be announced later today). Then there’s Baron Cohen’s noted history of targeting conservative figures, which he essentially weaponized in the Showtime series Who Is America?. Combine that with the apparent urgency to get this film released before Election Day and the below teaser trailer that takes direct aim at President Trump, and there’s a very real chance that the 14-year-later follow-up to Borat contains something that’ll create news right before Americans head to the polls.

But other than raising total hell, what is the film actually going to be about? Well, at this time, rumors indicate that the film will feature Borat attempting to marry his daughter — played by Maria Bakalova — to Vice President Mike Pence.

The first trailer for the sequel to ‘Borat’ drops tomorrow.

According to The Illuminerdi, “relative unknown Maria Bakalova will star opposite Cohen as Borat’s daughter and the film will focus on the duo’s journey to the White House to marry her to Vice President Mike Pence.” They’re also hearing that the film could contain an interaction former New York City mayor Rudy Giuliani, who currently serves as one of President Trump’s lawyers.

There have been rumblings about some of the altercations Cohen’s character will get into in the film including an interview with Rudy Giuliani where the police were reportedly called, as well as the comedian provoking members of a pro-guns rally in Olympia, Washington. [via The Illuminerdi]

We won’t have to wait much longer to find out what exactly the second Borat is about, as the first official trailer for the film is set to drop later today, with the film set to hit Amazon Prime Video on October 23.