Brad Pitt Bid $120,000 To Watch An Episode Of ‘Game Of Thrones’ With Emilia Clarke 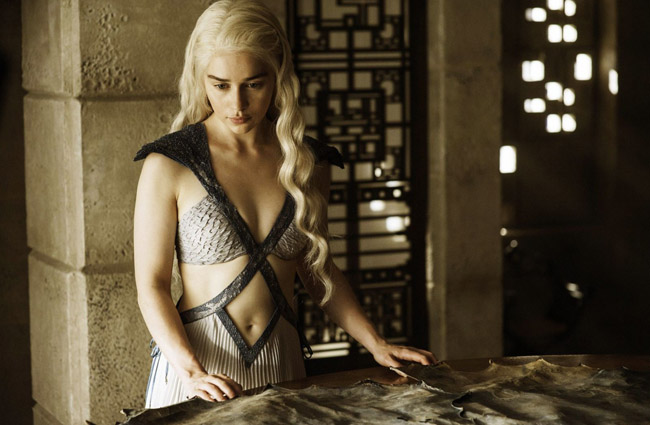 How much would you pay to watch Game of Thrones with the Mother of Dragons herself — Emilia Clarke? Well, Brad Pitt would pay $120,000. Unfortunately for Brad, that isn’t enough dinero to get to watch GoT with Khaleesi. Sean Penn held his annual silent auction gala for Haiti on Saturday night at the Milk Studios in Los Angeles. One of the experiences that were auctioned off was watching an episode of Game of Thrones with Daenerys Targaryen.

The charity, which was attended by celebrities such as Leonardo DiCaprio and Arnold Schwarzenegger, auctioned off the Game of Thrones viewing party with Clarke for a starting price of $20,000. Variety reported that the auctioneer yelled out “Is the King of the North here?!” Kit Harington AKA Jon Snow was in the building but had just stepped out to go to the bathroom. The price escalated quickly, and Pitt bid $80,000 for the companionship of Clarke. He then outbid himself with the price of $90,000 and finally offered $120,000 after Harington returned and offered to sit in on the GoT party. Good to see that Kit has recovered from his drunken escapade in New York City where he got kicked out of a bar.

However, Pitt didn’t win the special night with Dragon Queen as he was outbid by an unknown bidder who spent $160,000 to watch TV with Emilia Clarke. Imagine having the crazy bank account where you could pay $160,000 just to have Game of Thrones and chill with Emilia Clarke? All of the money raised goes to the J/P HRO & Disaster Relief Organizations for Haiti. Bad job by Pitt to not up his bid. Many would rob the Iron Bank for a night with the Lady of Dragonstone. Isn’t that right Jon Snow?