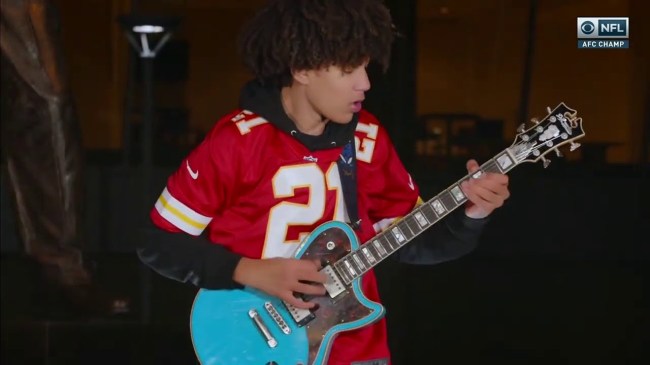 Brandon ‘Taz’ Niederauer is the best guitarist you probably hadn’t heard of prior to Sunday’s AFC Championship game. The 18-year-old was invited to play ‘the Star-Spangled Banner’ before the Bills and the Chiefs took the field for a chance to play in Super Bowl LV and did what he always does— shred.

The Blues, Soul and Rock & Roll six-string virtuoso is a long-time prodigy in the music world and had played with Gregg Allman, Derek Trucks, Warren Haynes, Stevie Nicks, Lady Gaga and Buddy Guy all before turning 15. He earned the nickname ‘Taz’ because his fast play and quick fingers reminded his guitar teacher of the Tazmanian Devil during his first-ever lesson.

Niederauer’s career is still young, but he continues to shred. Most recently, prior to the shutdown of Broadway, he starred in ‘School of Rock the Musical’ in New York City and was featured in Spike Lee’s Netflix series ‘She’s Gotta Have It.’ This is not the first time he performed the anthem, having gone viral for his performance in 2016.

He has since been invited to play before a handful of sporting events around the country.

His performances are often compared to that of Jimi Hendrix at Woodstock.

While working in a variety of different areas, Niederauer continues to record his own music and tour nationally with his axe.

To get a better sense of his full body of work, this Jam In The Van set will catch you up to speed on the talent that he is. The dude can really play.