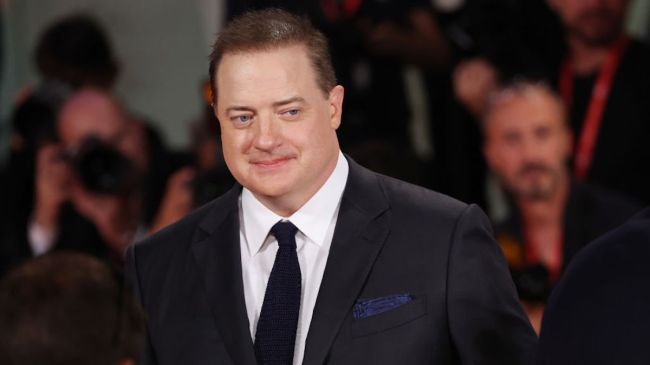 It’s been a wild couple of days over at the Venice Film Festival in Italy, as evidenced by the massively viral video of Harry Styles apparently spitting at Don’t Worry Darling co-star Chris Pine.

On the other side of the Hollywood spectrum, though — far away from the toxicity and narcissism of the Don’t Worry Darling disaster — is the Brendan Fraser renaissance, which seemed to hit its high point over the weekend.

Fraser, who stars in Darren Aronofsky’s upcoming film The Whale as a 600-pound man attempting to reconnect with his daughter, received a six-minute standing ovation following the premiere of the movie at the Venice Film Festival. Fraser is also receiving rave reviews for his performance, with some suspecting he could contend for an Academy Award this year.

Brendan Fraser is back — and he sobbed during the #Venezia79 six-minute standing ovation for #TheWhale. pic.twitter.com/y4l10ZFWQa

Once the video went viral, movie fans took to Twitter to show their support for Fraser, who has been one of the internet’s favorite actors for a few years now:

If you know anything about Brendan Fraser’s personal life and what happened to his career, then you should be cheering for this man. What a beautiful moment that’s is well deserved. The beginning of something special. https://t.co/obfjKeXNjG

brendan fraser was sexually assaulted by a hollywood executive, blacklisted from most major motion pictures for almost 2 decades, and comes back from his struggle to a 6-minute standing ovation in his honor tonight. what a fucking champion

Don’t know what you’re all talking about with a Brendan Fraser “comeback”. We’ve all been watching The Mummy twice a year since 99. The king never left.

Warner Bros shooting themselves in the foot by shelving Batgirl and missing out on the big Brendan Fraser comeback, very amusing

"Brendan Fraser's acting comeback" as if the man hasn't been in a Soderbergh film + television shows like Doom Patrol and Trust in the last few years. Brendan Fraser BEEN back, you're late to the party.

Brendan Fraser got blacklisted from Hollywood for being brave enough to come forward about his sexual assault, he is now getting his moment to look back at the industry that spat him out and roar in its face with #TheWhale – we fucking LOVE to see it.

As some of the tweets pointed out, while The Whale might be the critical culmination of Fraser’s comeback, the truth is that he’s been back in the spotlight for a few years now, putting in excellent work in films and shows such as Trust, Doom Patrol, and No Sudden Move. He was also set to appear as Firefly in Warner Bros’ canceled Batgirl film and will be starring in Martin Scorsese’s next film, the Leonardo DiCaprio-starring Killers of the Flower Moon.

The Whale, which also stars Stranger Things breakout Sadie Sink as Fraser’s daughter, is currently scheduled to hit theaters in the United States on December 9. The film is directed by Darren Aronofsky, who has also helmed projects such as Requiem for a Dream, The Fountain, The Wrestler, Black Swan, Noah, and Mother!.