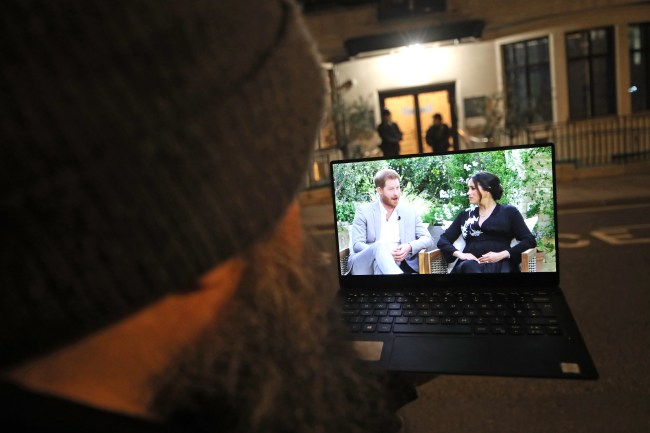 On Sunday night, CBS aired Oprah Winfrey’s latest bombshell interview with Prince Harry and Meghan Markle which drew plenty of interest from viewers across the pond.

Despite the fact that Oprah’s interview aired extremely late in the UK, many Brits stayed up to watch live streams online. British viewers were immediately stunned to see so many pharmaceutical ads air on American television considering it’s illegal to advertise prescription drugs to the general public in the UK.

Writer Ayesha A. Siddiqi compiled a hilarious Twitter thread of British viewers reacting to how absurd it is to watch American ads that are designed to sell drugs.

Nah…how are the side effects of the medicine in American ads more lethal than the thing they’re treating??? 😭 pic.twitter.com/cMTlLm5fRP

American adverts are so dark… pic.twitter.com/WFyC40PYUH

i’m watching the meghan interview recording and yet again i can’t understand why american tv ads are like “ask your doctor for…” or “tell your doctor…” why the fuck would you be the one to tell a DOCTOR what medicine to give you????? maybe i’m too european to get it but wtf

I remember the first time I saw American TV. Drugs, cars, food. Drugs that stop your food allergy symptoms. Processed shite that replaces real food. Drugs that help dampen the other drugs symptoms. "Now over to Stu for Sports". 😱

American ads are so scary, just mad drugs and ppl suing each other upandan 😭

watching american adverts during the megan and harry oprah interview is so surreal, why are so many of them for meds? are yall ok?

American adverts are unhinged af! Its wild how many drugs get casual ads 🥴