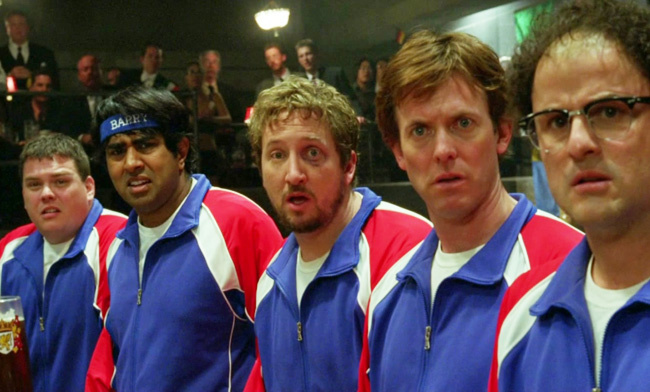 I’m a fan of basically every single movie that’s been made by the comedy collective known as Broken Lizard— including the criminally underrated The Slammin’ Salmon— but I think most people would say Super Troopers is their magnum opus (at least so far). While I love to think there’s a chance the upcoming sequel can take the top spot when it hits theaters on 4/20, comedies that are released more than 15 years after the original don’t exactly have the best track record (I’m looking at you Dumb and Dumber To).

With that said, I think you could also argue that 2006’s Beerfest— which is finally available on Netflix—is the best film in their oeuvre (thanks in no small part to the performance of Will Forte, who was absolutely robbed of a Best Supporting Actor nomination that year). Much like Super Troopers, it follows a group of guys who’s shenanigans are cheeky and fun as they prepare for the Beer Olympics featuring a juggernaut of a German team whose shenanigans are cruel and tragic.

The movie ends with the crew joining up with Willie Nelson in Amsterdam to form a team for “Potfest,” and its been begging for a sequel ever since. It’s been over a decade since the original came out, but if a recent comment from Jay Chandrasekhar is any indication, we might get Beerfest 2 (or Potfest 1) in the not so distant future.

According to CinemaBlend, Chandrasekhar— who directed both Super Troopers— fielded a question about the possibility of a follow-up to Beerfest at a screening for their newest movie. He said the crew already has the plot of the film planned out but there’s currently no timeline for the sequel. When you consider one member of Broken Lizard said that they’ve already focused most of their attention on Super Troopers 3, it could be a while until we get another Beerfest.

If that is indeed the case, I can only hope good things come to those who wait.