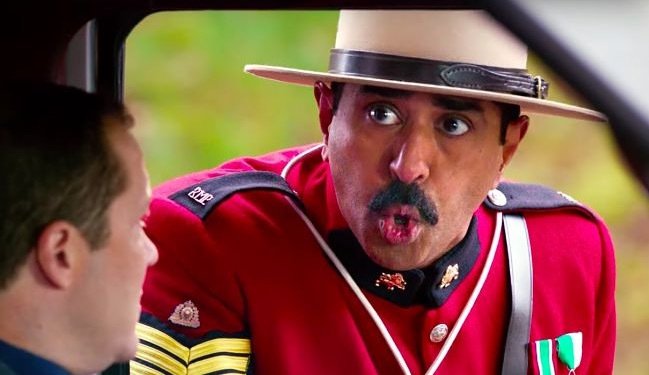 Are you ready for shenanigans? Well, based on the brand new full-length red band trailer, it appears that Super Troopers 2 will supply all kinds of shenanigans from cheeky and fun to cruel, tragic. From sexual relations with a moose to bald eagle hunting to porta-potty tipping to even Farva finally gets his beloved liter of cola. Actually, they’re not shenanigans at all really. Evil shenanigans.

If you’re a fan of Broken Lizard’s cult comedy Super Troopers, you’ve waited 17 years for the sequel and the trailer is out right meow. This time your favorite highway patrol from Vermont won’t be going up against the Spurbury Police, but rather Canadian mounties. Do you boys like St Georges Du Laurent?!?! Mac even learned how to speak French and busts out the dialogue, “Feather duster croissant les miserables fart catcher Luc Robitaille perriere Fran Tarkenton something something parfait.”

Here is the official synopsis:

“Everyone’s favorite law enforcement team is back by popular demand with the long anticipated follow up to the cult comedy classic…SUPER TROOPERS. When an international border dispute arises between the U.S. and Canada, the Super Troopers- Mac, Thorny, Foster, Rabbit and Farva, are called in to set up a new Highway Patrol station in the disputed area. Unconventional police work follows, and the result is…SUPER TROOPERS 2.”

Great Tim Horton’s ghost! We are getting real close to the release of Super Troopers 2, which of course goes down on 4/20. Of course.