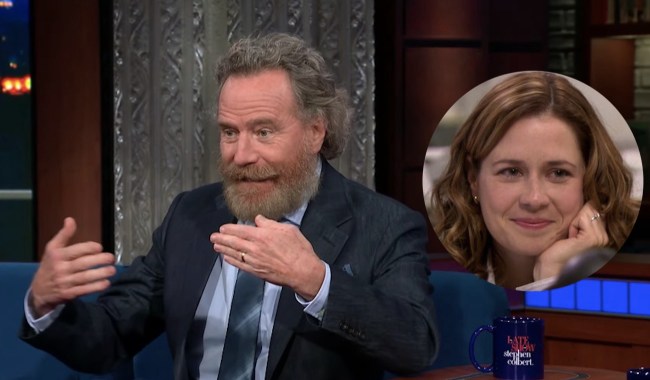 While I knew iconic Breaking Bad star Bryan Cranston had directed a handful of episodes of the legendary series — Season 2’s “Seven Thirty-Seven”, Season 3’s “No Mas”, and Season 5’s “Blood Money” — I had no clue that the four-time Best Actor winner had applied his trade on The Office, too.

That’s right, in the midst of his Breaking Bad run — that saw him win the Emmy award for Best Actor in a Drama Series an astounding four times — Cranston took the time to direct an episode of The Office, Season 9’s “Work Bus.”

During a recent interview on The Late Show with Stephen Colbert, a gloriously bearded Cranston detailed his experience directing the hit NBC workplace sitcom and even told an anecdote about how Jenna Fischer, who famously starred in the series as Pam Beesly, saved the cast and crew from carbon monoxide poisoning.

In the episode, Jim tricks Dwight into believing that working in the Dunder Mifflin office is unsafe; but instead of getting the day off, Dwight makes everyone work in a cramped bus.

Cranston then explained how it was Fischer who first noticed the smell of exhaust, alerting the rest of the crew:

The actress alerted the cast and crew, “I smell exhaust.” Cranston didn’t believe her at first, until he “got a chair and I stood up on the thing and I stuck my nose up in there, and sure enough, it was billowing down. It was carbon monoxide. I wasn’t quite sure so I got a second wind, I got some more, I got nice and dizzy, and then realized, ‘Oh my God, we could have all been dead.’ It would have been one hell of an episode. It would have been the finale before they would have planned that though.” [via Uproxx]

Other than slinging mezcal with his Breaking Bad BFF Aaron Paul, Cranston will next be seen starring alongside a bevy of other A-listers in Wes Anderson’s Asteroid City and in Matthew Vaughn’s Argylle, which is also stocked with endless movie stars.