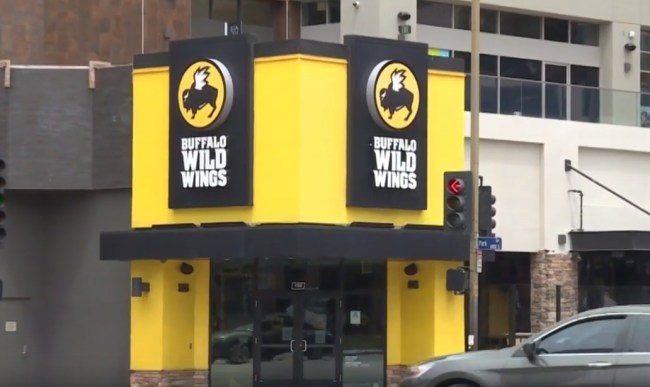 Imagine your mouth watering to enjoy some Caribbean jerk wings and salt and vinegar seasoned wings from Buffalo Wild Wings and before your scrumptious food arrives, you get an air delivery of another kind. Instead of yummy chicken wings in front of you, a rat falls from the ceiling and lands on your table at BDubs. That was the gross situation one customer found herself in this week.

Alisha Norman was at a Buffalo Wild Wings restaurant in Los Angeles on Thursday and were watching the U.S. women’s soccer team play Sweden in the World Cup. She and her friends ordered a few adult beverages and were perusing the BWW menu to decide what kind of delightful wings they would order. Before the waiter could take their food order, a rat fell from the ceiling and landed on Alisha’s table, directly on the menu she was looking at. That’s a strange appetizer.

“I heard a noise and we all looked up and down came the rat,” said Norman, a Houston native who was on vacation in Southern California. “It was disgusting, it was still alive. Its heart was still beating,” she said. The food is a little too fresh at this Buffalo Wild Wings.

The restaurant’s manager took two plates and scooped up the rodent (Let’s hope those plates were incinerated) and threw it in a bag. Buffalo Wild Wings paid for Norman’s lunch.

A rat falls from the ceiling onto a customer's table at Buffalo Wild Wings. https://t.co/lZV4WtTGMe pic.twitter.com/OuecLySQfC

The restaurant’s manager claims that the construction in the area caused the rat into the ceiling.

This particular Buffalo Wild Wings had an A rating from the city’s Department of Public Health. Give that mouse some Red Bull and slather on some Mango Habanero sauce, and you’ve probably got some pretty great wings.

This right here, is why we can’t have rats thinking that they can be chefs like in Ratatouille.