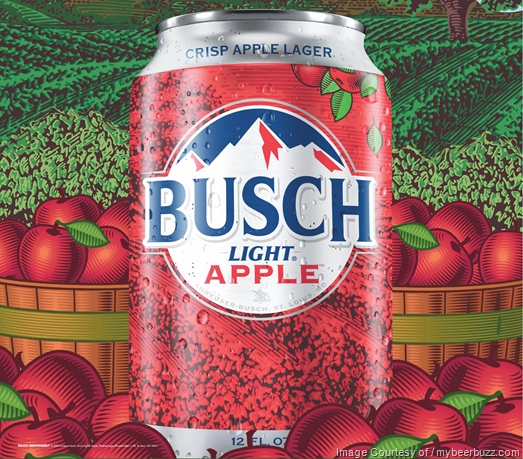 Ever think you’ve seen it all when it comes to flavored beer, then you’re blown away by something completely out of the blue?

That’s how I feel about the latest and greatest beer creation to fall from the Busch family tree:

According to the can, it’s a limited edition release from Busch Light, so don’t expect these red delicious Apple Lattes to be around forever.

Fresh picked just for you! 🍎
Busch Light Apple just arrived so look for it in stores next week!! pic.twitter.com/R1wG3Al5mE

This is is Anheuser-Busch’s second go-around at an apple-themed beer.

In November 2015, ABI released Bud Light Apple, a crisp and slightly sweet beer with a limited release in the state of Georgia.

Busch Light Apple will be released nationwide. It comes in colorful red, apple orchard-themed packaging, available in 30 racks and other assorted sizes on Monday July 13, 2020 according to a launch video from Busch Beer:

Look, I’m a hard working American. I love an ice cold beer after a long day’s work. I also enjoy digging my molars into a crisp apple – It’s the perfect healthy snack.

If it’s apple flavored, I’m eating it and enjoying it: Apple pie, apple cider, apple butter, apple crisp, apple sauce – especially with some pork chops off the grill. I’d even through green apple-favored Airheads and Jolly Ranchers in the mix as a top notch candy flavor.

But the idea of a Busch Light Apple beer has my jaw on the floor. I’m thinking Naturdays except with a dash of Angry Orchard in the mix? I can’t wait to try it.

You could say it’s the apple of my beer-loving eye.

Hopefully even on Kevin Harvick’s NASCAR. This guy has the right idea:

Hey @KevinHarvick, @RodneyChilders4, @StewartHaasRcng & @BuschBeer: are y'all going to run a Busch Light Apple scheme at some point this year? I'd love to have that diecast in my collection! pic.twitter.com/6ZNm5g4h9c

Are you excited to try it?