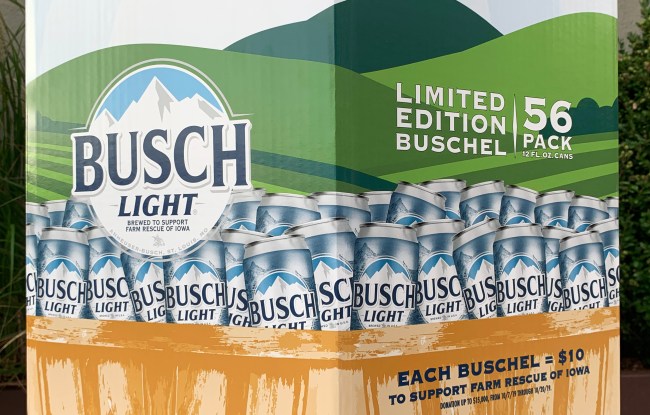 When I was in college, virtually every liquor store purchase I made was based on a careful calculation of what product contained the most alcohol for the lowest price, which is why I largely subsisted on Four Loko and Steel Reserve.

Of course, to paraphrase Jesus, one cannot live on malt liquor alone, and as a result, I also purchased plenty of 30-racks that I regularly consumed in an unhealthy amount of time.

With that said, I wasn’t much for brand loyalty, as my go-to beer was whatever was on sale that week. However, that isn’t the case for college kids in Iowa, where—as Carson King recently taught us—Busch Light reigns supreme.

The beloved Lattes are consumed in massive quantities in Iowa and beyond (residents drank the city of Memphis dry when they flocked to Tennesee for the Liberty Bowl in 2017), and now, Busted Coverage reports the company is making it easier than ever to stock up thanks to the 56-packs they just started selling in the state.

While the price is a little steep when you consider how much a standard 30 of Busch Light normally goes for, it’s worth noting that $10 will be donated to Farm Rescue of Iowa, a charity that assists farmers in the state who suffer a setback due to natural disasters, illness, or injury.

So why 56 beers? A bushel of corn apparently weighs 56 pounds, which is a nice little fun fact I never knew I needed in my life.

Of course, this has nothing on the 77-pack that Natty Light rolled out last year, which retailed for a wildly low $34.99 (much to the chagrin of Maryland’s comptroller), and while the 56-pack may be more expensive, at least you can feel good about helping a great cause (before waking up feeling terrible because you had way too much Busch Light).