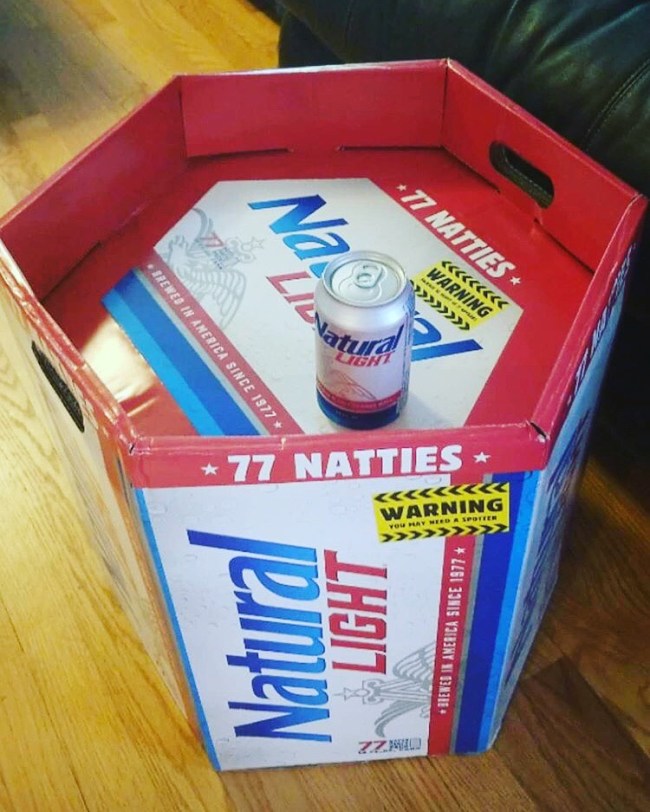 Last week we broke the news of the new Natty Light 77-pack, a modern marvel in beer packaging. It weights 64-pounds and it’s only available in College Park, Maryland, as of right now.

What we didn’t disclose about this light beer behemoth, however, is the price.

Bros around College Park are starting to buy this 77-beer beast, which means we have reports of pricing. Yesterday our friends over at Whiskey Riff revealed a price that the Natty Light 77-pack cost $30, which breaks down to about 40 cents per beer.

Meanwhile, Darren Rovell reports a price of $34.99. The Bros in his pic are also rocking some sick Naturdays swag, of which I’m extremely jealous of.

The folks at ⁦@naturallight⁩ are offering a limited edition 77-can pack this week, only in College Park, Maryland ahead of homecoming, suggested price is around $34.99 (📷 by ⁦@BobHallBeer⁩) pic.twitter.com/dKD6zeTpkp

Which raises a good point…

It’s a promotional price I’m told. I called up the distributor.

That’s about 45 cents a beer, for those keeping track.

UPDATE: Our BroBible source reports he pod $30.99 for the Natty Light 77-pack

Regardless, a price point under $40 is A PRETTY SWEET DEAL for that many Natties. Have to wonder if the price will stay the same *if* and *when* they do the promotion elsewhere.