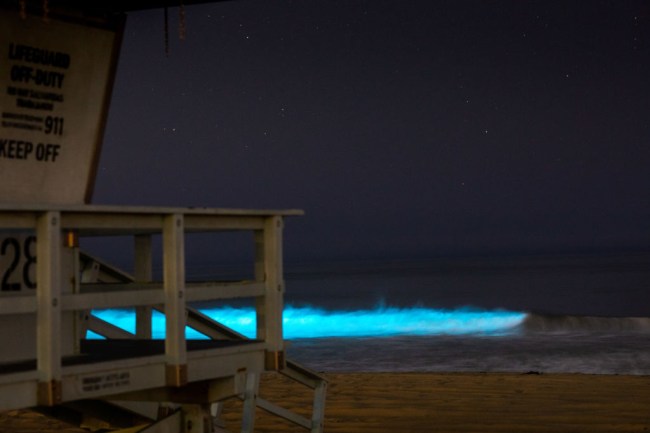 When you really think about it, nature provides some truly epic light shows. The electrifying beauty of lightning storms, for example. Or a spectacular meteor shower in the night. Aurora Borealis. The red and blue vaporwave Alpenglow that happens just after sunset, when the suns rays are being bent after going over the horizon.

Bioluminescence is one those epic natural light shows. Known as Red Tide in oceans around the world, it’s caused by a “bloom” of microscopic organisms that are cable of making their own blue light, usually in warm water.

It causes the ocean’s wave to glow an electric neon blue – almost aquamarine.

According to the Scripps Institute of Oceanography at UCSD, these are caused by dinoflagellates – a marine plankton – which is the most common sources of bioluminescence at the surface of the ocean. They all group together during a bloom, then glow when stirred up by waves crashing on the shore.

In southern California, bioluminescence blooms started in a big way this past week. This means that surfers headed out to open beaches to ride these psychedelic waves.

It’s wild to see what the glow looks like, even as surfers paddle out to the break.

Here’s another edit from another group of surfers in Newport Beach, which is still open as of this writing on April 28, 2020. Looks like you need a pretty good camera to actually capture this spectacular phenomena:

Before you head out to shred the trippy gnar, two things to consider: (#1 – There’s some debate in the marine biology community on what Red Tides contain toxic microorganism that can get you sick and what don’t.

via the Scripps Institute:

There are several types of neurotoxins produced by dinoflagellates. These chemicals may affect nerve action by interfering with the movement of ions across cell membranes, thus affecting muscle activity. The toxin saxitoxin, produced by Gonyaulax off the west coast of North America, and Alexandrium off the northeast coast, accumulates in shellfish. Eating contaminated shellfish causes paralytic shellfish poisoning (PSP). The worst cases of PSP result in respiratory failure and death within 12 hours.

Seems like a pretty big dice roll, especially in the middle of the COVID crisis.

“Last night was truly one of the most magical nights of my life. Capt. Ryan of Newport Coastal Adventure invited me along to capture rare video of Dolphins swimming in bioluminescence. – by Patrick Coyne pic.twitter.com/Zjyul6qZCY