Leatherface And Billy The Puppet Stalk Their Prey In Call Of Duty: Warzone’s ‘Haunting Of Verdansk’ Trailer 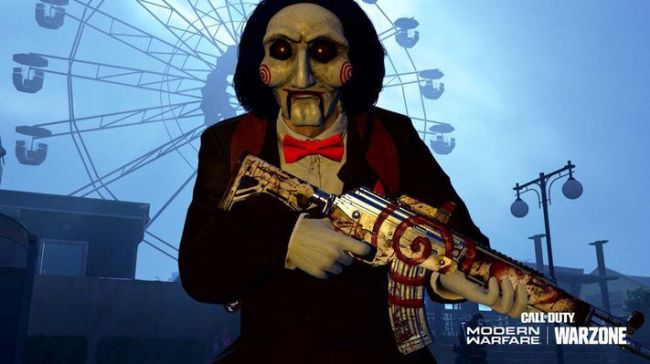 Activision released the blood-dripping trailer for the Halloween-themed “The Haunting of Verdansk” for Call Of Duty: Warzone. The trailer features two iconic figures from two classic horror movies: Leatherface from The Texas Chainsaw Massacre and Billy the Puppet from SAW. “The SAW Bundle features The Phlebotomozier Lethal Equipment piece, a special throwing knife will drill into your enemies upon impact. And oh yes, there will be blood… if it lands on target.”

Activision provides a spine-tingling description of the upcoming event:

As Halloween draws near, a squad of operators drops in for what seems to be a normal infiltration into Verdansk… though there’s been back-channel chatter about some unexplained and odd occurrences across the remote areas of the map. Operators have been briefed about reports concerning a serial killer who wears his victim’s faces on his own. There’s scattered intel about strange sounds emanating from various locations within the warzone; and not least the piercing, creepy laugher of a ventriloquist doll….

It isn’t long before hell breaks loose: One by one, the squad is brutally picked off until there is just one survivor, who after a confrontation with Verdansk’s own urban legend, vows to return under the cover of night and avenge his brothers in arms. Welcome to Season Six’s latest content drop, featuring the Haunting of Verdansk.

Everything you need to know about the new Haunting of Verdansk event!https://t.co/gqfMFGhcVg pic.twitter.com/C3hBVpm488

The Halloween-themed event will offer a creepy perk to players who notch three kills without dying: their heads turn into jack-o-lanterns. The pumpkinhead will be set on fire if that same player marches on to a ten-kill streak.

During the Haunting event, in all #ModernWarfare multiplayer modes – if you get on a 3 killstreak, your head turns into a jack-o-lantern.

+ Visual updates in modes, like Scarecrows as the Domination flag and more. https://t.co/gqfMFGhcVg pic.twitter.com/fXFv1l0bOJ

There are select modes that feature night-time fighting and a “Trick or Treat” reward system, where special Supply Boxes will contain either spooky frights or scary good blueprints and personalization items. Don’t forget to pack some thermal optics and use the Cold-Blooded perk.

Get ready to try to make the undead even more dead in the Zombie Royale, a twist on Battle Royale where you attempt to kill the walking dead.

Instead of a Gulag, dead Operators come back to life as Zombies. Zombies can't use weapons, but they have increased speed & jump + melee attacks. https://t.co/gqfMFGhcVg pic.twitter.com/P103bcTOMk

There is also a new fully automatic JAK-12 Shotgun that packs “enough firepower to pulverize an entire enemy squad into head cheese.” The weapon boasts an “open bolt blowback system, allowing it to push lead out at a fire rate that is faster than any other weapon in its category,” plus it can handle a 32-Round Drum Mag, the largest capacity magazine for any shotgun in the game.The new shotgun can be unlocked through an in-game challenge, or a blueprint variant can be acquired by purchasing the “Lacedaemon” Store bundle.

Call of Duty: Modern Warfare gets new modes: Snipers Only, as the name suggests is a deathmatch between snipers; and Onslaughter, a mode where players “must wrest control of a Juggernaut suit that spawns somewhere on the map and advance forward into a specific goal area.”

Call of Duty’s Haunting Of Verdansk begins October 20 and creeps around until November 3.