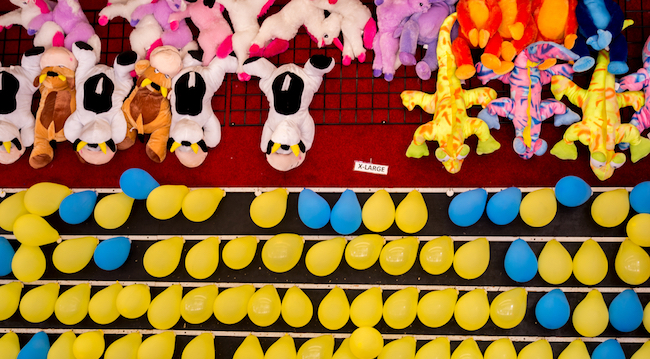 If you ever got $20 from your parents to buy food on a middle school field trip to an amusement park, there’s a very good chance you know what it’s like to spend the majority on carnival games and survive off a cup of fries and unlimited soda refills. I’m speaking from personal experience, but I have the feeling I’m not the only one.

The only prize I ever took home was a basketball with the Superman logo on it, and after four years of band trips that ended in half a day at Six Flags, I realized carnival games are bullshit. Now, Mark Rober has confirmed my suspicions with a riveting exposé that could turn the carnival world on its head.

Rober and his associates spent multiple days scouting the carnival, and according to their observations, you have the best chance of winning the classic basketball shot. They did note the rim is actually 11 feet off the ground and shooters are required to stand 28 feet away— to put this in perspective, the NBA arc is 24 feet away from the basket.

If you feel like losing all your money in pursuit of a giant teddy bear, you should post up at the ring toss, the shooting gallery, or something called a ladder climb. Rober did provide some tips for improving your chances of victory, but if you really want to come away with a win, spend your money on funnel cake and corndogs instead.