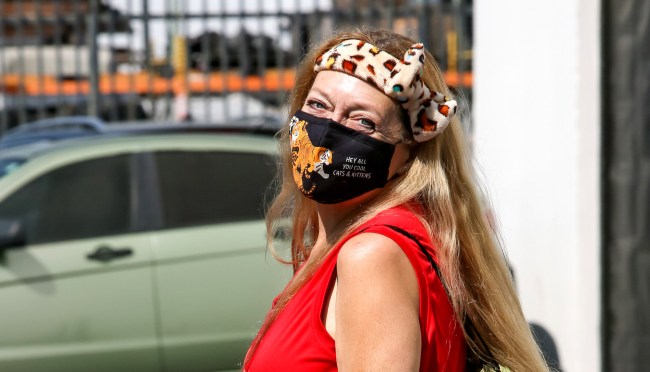 Over the weekend, it was revealed that Carole Baskin of Tiger King fame wrote a very interesting letter 7 years before her second husband went missing in which she said she would have “killed” her first husband to get out of the marriage.

This wild revelation came to light during the airing of a new documentary on Investigation Discovery called Joe Exotic: Tigers, Lies and Cover-Up.

According to a press release, “Retired homicide investigator Jim Rathmann leads the investigation to discover the truth, revealing new theories uncovered by private investigators, reliving Lewis’s final days and demeanor with those closest to him, and unpacking evidence exposed by criminal and legal experts. Punctuated throughout are interviews with those in Joe Exotic’s inner circle, including his husband Dillon Passage and members of ‘Team Tiger,’ a group working to free Joe from jail. Beyond the controversial missing person investigation, this special also explores the criminal case against Joe Exotic and raises the question: Was Joe Exotic the predator all along, or is he actually the prey?”

As fascinating as all of that is, and it is, one little bit of information that came to light wasn’t mentioned in the lead-up to the show’s airing.

TMZ got a sneak peek at a letter Baskin sent to Don’s wife, Gladys, in August 1990. I say wife, because Gladys and Don Lewis were still married when Carole and Don began having their affair.

In the letter, Baskin tries to explain her side of the story to Gladys and in the middle of the lengthy letter Carole brings up her first husband, Michael Murdock, and admits, “I had to get out of my marriage and would have eventually killed my husband to do it.”

Baskin tells TMZ that yes, she did write that phrase, but it was written “in the context of self-defense as Mike Murdock was physically abusive to me to the point of causing me to fear for my life.”

True or not, the timing of her writing that wasn’t great as Rathmann points out the letter was written just seven years before Lewis went missing.

Combine that with online sleuths digging up evidence that could prove Baskin was lying about Lewis’ disappearance, the fact that the local sheriff says she forged Don’s signature on his will, her refusal to take a polygraph test, and the fact that Baskin’s boyfriend after her husband disappeared also filed for a chilling restraining order against her, and it’s definitely more than enough to raise a few eyebrows.

Part 3 of Joe Exotic: Tigers, Lies, and Cover-Up airs on Monday, September 28th at 9 p.m. ET on Investigation Discovery. It will be followed by another new documentary Joe Exotic: Before He Was King.

This comprehensive, one-hour special puts the entire salacious story in context and uncovers dark secrets about Joe’s past. Using exclusive and never-before-seen interview footage of Joe Exotic, including personal photos and home movies, we reveal the dark secrets that led to the colossal crash which has landed him in prison for decades. What sent Joe Exotic down the path of depravity, polygamy, live animal collecting and trading and ultimately, conspiracy to commit murder?

Join a panel of forensic psychologists and law enforcement experts who have studied the case including ID’s own, Derrick Levasseur, as they reveal the troubled past of the man behind the hype. For the first time ever, interviews with the ‘King’s’ inner circle – including a prison interview from Joe’s second husband, Jeffrey Charles “JC” Hartpence – this special analyzes the evidence and presents a vivid portrait of his psychological descent into madness