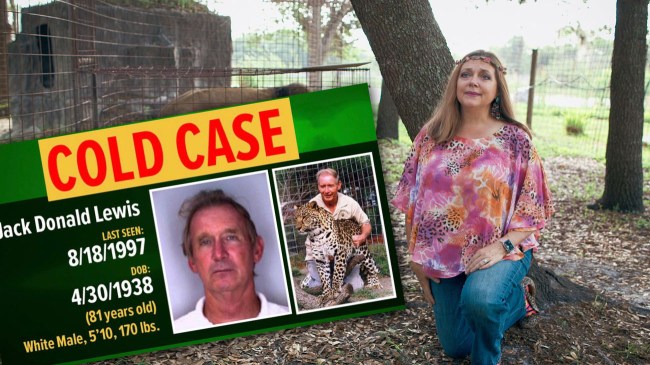 Last month two handwriting experts said that they believed the signatures on both the power of attorney and the will of the former husband of Tiger King subject Carole Baskin, Don Lewis, were forged.

Unfortunately, the statute of limitations for such a charge against Baskin has passed.

However, on Wednesday of last week, the sheriff investigating Lewis’ mysterious disappearance, Chad Chronister of Hillsborough County, says he is still following up on several new leads.

“They called in some experts to say that the will was a forgery and I had already told them that two months ago,” Chronister said last week. “They had two experts deem it 100 percent a forgery. That’s the only reason. There’s no recourse. A judge deemed it valid. So the civil side of it, with the execution of the will [and] dispersement of the funds is one thing. But then you have the criminal side which is unable to prosecute.”

He reiterated that his office is still following up on the numerous tips they have received regarding Lewis’ disappearance, “Investigators have some great leads. They’re working through them. I hope something pans out.”

Over the weekend, one of the daughters of Don Lewis spoke to TMZ about the ongoing case.

Donna [Pettis] tells us she’s been meeting with several lawyers in hopes of landing one willing to take on the high-profile case and finally get some justice for her dad.

She says she and her sisters are considering hiring 2 attorneys — a criminal and a civil — in order to get the ball rolling, but they’re still weighing options.

The bottom line is … Donna and her family plan to go after Baskin in whatever legal manner still possible, and they also want more action taken in investigating Lewis’ death.

While Donna doesn’t come right out and accuse Baskin of killing Lewis or having someone else kill him (like his former lawyer who thinks Lewis was strangled and thrown out of a plane), she does, however, believe Baskin knows a lot more than she is willing to admit.

Related: Joe Exotic Writes Letter Claiming He Will Be Dead Inside 3 Months, Begs Cardi B And Kim Kardashian For Help