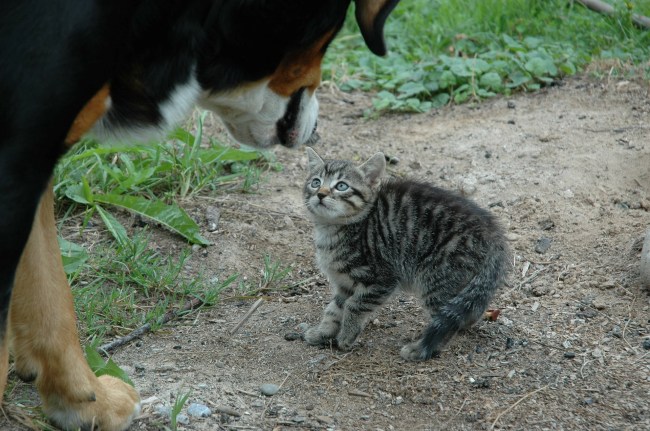 I’m not a cat hater. I grew up with cats and dogs and birds and rabbits. We also had pet snakes and lizards and a terrarium with a 1-pound frog. My parents had a problem with saying ‘no’ when it came to getting new pets. My favorite cat lived to be over 21-years-old and my parents had Flash (the cat) longer than they’d had me by the time he passed (I was 20 at the time).

The thing is the best compliment you can ever give a cat is ‘that cat’s just like a dog’. That’s it. The absolute ceiling for a cat is being as good as a below-average dog. And that group of ‘dog-caliber cats’ only encompasses a really small percentage of cats. The vast majority are selfish pricks. Bowser, our other cat, was a massive prick.

This cat right here is a massive prick. I know this because it ambushed that dude out of nowhere. This clip that’s been going viral for a few days is one of the most chaotic things I’ve ever seen. It has a cat knocking this dude out and then a dog wearing bootie shoes trots over to defend the man’s honor against the evil cat.

The clip has been on YouTube for a month but it’s exploded on Twitter and for good reason. Nobody can wrap their minds around how many strange things are going on here and I suspect you’ll feel the same in just a few short seconds. It’s pretty impossible to watch this just once so be prepared to rewind and rewatch a handful of times.

That dog appeared oblivious to the falling cat knocking the dude out but didn’t hesitate for a second when it came to fisticuffs and defending the gentleman’s honor. Dogs are the best. This video is further proof of that. It feels like beating a dead horse when it comes to the cats vs. dogs argument but dogs just always come out on top, always.

This video unlocked some strange memory I had of canoeing down some river in Florida as a kid and how there were ‘watch for falling snakes‘ signs where we launched and my dad was all ‘that’s not real’ but within minutes of starting to paddle we watched a snake fall out of a tree onto another canoe and everyone lost their minds. It’s been so long and I was so young I’m actually wondering if that was a dream or if it really happened but I can remember it so vividly.

Not that you care, just thought I’d throw that image out there for you bros and to let you know that somewhere there are snakes falling out of trees.