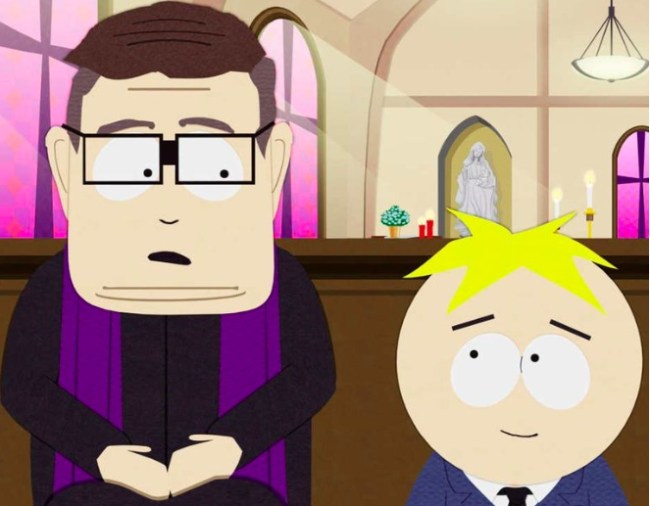 South Park, fresh off being awarded the top prize in television’s most offensive show of all-time list, is still revving up in its 22nd season. In South Park’s latest episode, titled “A Boy and a Priest,” the entire town is under the false assumption that Butters is being molested by local Catholic priest Father Maxi. In response, the Church sends Maxi to another congregation, a tactic used by the Catholic church most recently highlighted in the Netflix docuseries, The Keepers.

The episode is a satirical representation of the widespread and institutional cover-up of sexual abuse in the Catholic Church spanning, well, who really knows.

The October 3rd episode of South Park, titled “A Boy and a Priest,” portrayed molesting priests as pedophiles. This is factually inaccurate: Almost all the molesters—eight in 10—have been homosexuals. Therefore, the cartoon-victim characters should have been depicted as adolescents, not kids.

In Hollywood, the creators of South Park, Trey Parker and Matt Stone, are seen as courageous. They are really cowards. It takes courage to tell the truth.

What a great microcosm of the Catholic Church, just completely missing the point. So the problem wasn’t with the substance of the episode, it was that Butters was statistically too young to sexually abuse? And that Parker and Stone are “cowards” because they won’t identify pedophile priests as “homosexuals”?

Blaming the gays, the Catholic Church’s ace in the hole.

I guess I shouldn’t have expected more from a guy who just last August defended priests by claiming it’s not rape if the child isn’t penetrated.

Send this dude in a rocket to the sun, please.