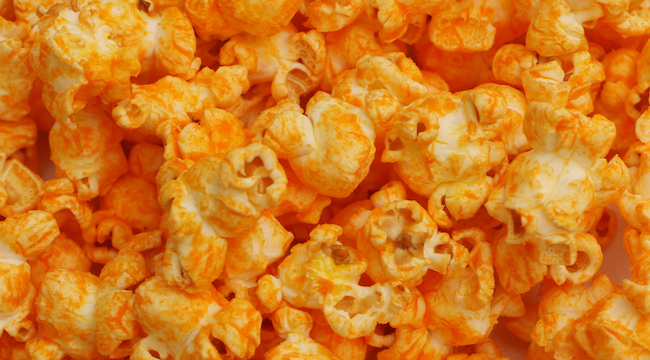 There have been some incredible advances when it comes to filmmaking technology over the past few decades, but there is one part of the movie-going experience has remained largely unchanged: concession stands. I’ve gone to a couple of places that had a bar in the lobby and have gotten incredibly spoiled thanks to living in close proximity to an Alamo Drafthouse, but most movie theaters have gotten complacent when it comes to their snack game.

You can expect the same offerings at 99% of concession stands. There’s a case with a box of Snow Caps that’s gone unsold since 2002, an ICEE machine featuring some weird flavor no sane person should ever order, and popcorn that was sitting in a giant garbage bag for days on end before getting thrown into a bag. that If you’re lucky, there might be a machine that lets you add your own butter. Woo-fucking-hoo.

However, it appears things are about to change thanks to a revolutionary new snack that’s about to roll into Regal Cinemas around the country.

Last month, the internet was set ablaze after a picture of cartons of what appeared to be Cheetos-flavored popcorn started circulating on Twitter. However, it was unclear if the snack would ever be unleashed in the wild.

It took a while, but Frito-Lay has finally confirmed the popcorn will be making its debut in theaters on December 15th. Here’s how they describe the snack:

Cheetos Popcorn features light, airy Regal popcorn that has been puffed to perfection and paired with warm, cheesy Cheetos flavor and Crunchy Cheetos to create the perfect cinema snack.

It sounds a lot like the orange popcorn that comes in those giant tins that magically appear during the holiday season, only people will actually want to eat this.

Cheetos Popcorn originally appeared on our radar a couple of years ago when it was tested out on CinemaCon attendees in Las Vegas, and it appears it took a bit of time for Frito-Lay to perfect the formula. I can only imagine how much time went into calculating the proper popcorn-to-Cheeto ratio and how fat the people responsible for figuring it out got in the process.

I thank them for their service.