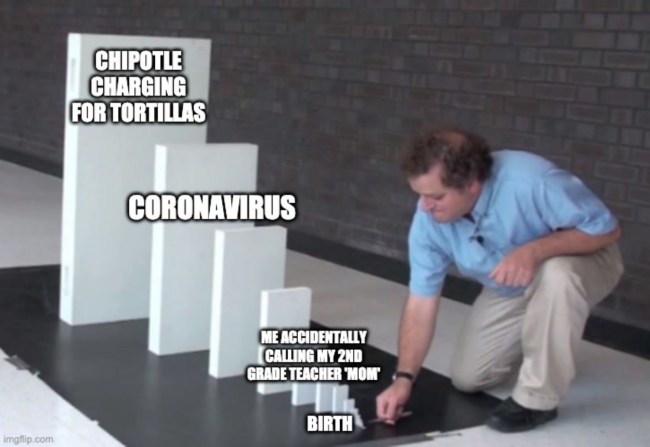 The Burrito Bowl is one of the most popular items on the menu at Chipotle. I was a burrito traditionalist for a LONG time, for most of my life, but in the past few years the curtains were pulled back and I came to the light. I’m now a Burrito Bowl Guy™ for an abundance of reasons.

Traditionally, Chipotle would give the customer a free tortilla as a side with their Burrito Bowl. After all, you simply cannot have a ‘Burrito’ without a tortilla. Savvy Chipotle eaters would take advantage of the free tortilla side to dip in salsa, guac, queso, or munch on and those same savvy customers just noticed that Chipotle surreptitiously started charging a Tortilla Fee on their Burrito Bowls.

Burrito Bowl fans on Twitter were quick to put Chipotle on blast for sneaking the fee in during a time in history when everything sucks. For many, this is the straw that broke the camel’s back. The people cannot take it anymore. This $.25 charge doesn’t appear for actual Burrito orders so why should it appear for Burrito Bowl orders???

One Twitter user wrote “Chipotle now charges 25 cents for ordering a tortilla on the side when ordering a bowl. 2020 has reached an all time low,” and another added “0.25c for a side tortilla? Seriously?!? After all these years of being a loyal customer because you don’t nickel and dime, you now screw us during the pandemic?!?” Here are some more reactions from Twitter to the Tortilla Fee:

Chipotle charges for a tortilla on the side now..Find me filling my water cup with Sprite and bringing my tortilla from home at a Chipotle near you.

tortilla on the side at chipotle is no longer free.. corporations rly go out of their way to hurt us

Chipotle charges 25 cents for a tortilla on the side now. A sad day indeed 😔

since when did chipotle charge 0.25$ for a tortilla on the side I'm mad

chipotle is now charging for a tortilla on the side? this is discrimination

Chipotle starting to charge 25 cents for a tortilla on the side now??? In a pandemic???! The disrespect.

So they charge for a side tortilla at chipotle now. Rude AF honestly.

Can’t we be mad at both? Are we not capable of being mad at everything?

instead of being mad about chipotle charging $0.25 for a tortilla, be mad about their food waste!!!! they throw away literal pounds of plain cooked rice every night that could easily be donated to shelters!!!

This dude is bringing receipts:

This all feels like some executive needed to hit some goal in order to get his massive bonus so he was like ‘what’s something we can do to make a ton of money real quick?’ and boom, we the people get hit with the Tortilla Fee while the man gets paid. I can’t say that I’ve personally been eating Chipotle a ton lately nor will $.25 ever stop me from asking for a tortilla side with the Burrito Bowl but it does seem like a petty policy change.