The Choco Taco Has Been Discontinued And People Are Not Happy 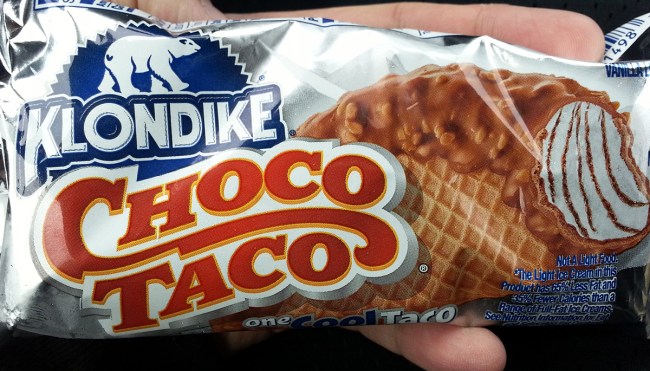 If you recently found yourself suddenly overcome with a palpable sense of dread or grappling with the unshakable feeling that something had upset the natural order of the universe seemingly out of nowhere, you can take solace in knowing your fears were not unfounded.

Why? Well, as much as I hate to be the bearer of bad news, I feel it is my duty to inform you that the most likely explanation for that seemingly random disturbance was likely related to one of the more devastating developments to hit the freezer aisle in recent memory: the Choco Taco has been discontinued.

Rumors concerning the demise of the frozen treat started to swirl over the weekend, and on Monday, The Takeout spoke with a Klondike representative who confirmed the company has permanently ceased production of the dessert taco that made its grand debut in 1984.

Given the recent nature of the product’s demise, I won’t speak ill of the dead by pointing out the Choco Taco frequently left plenty to be desired thanks to a delicate structure that made it prone to becoming crushed somewhere in transit and the fact that the cone that served as a shell usually ended up being soggy to the point of chewy.

No, that would be simply untoward.

The Choco Taco left behind a legion of loyal and devoted fans, and it’s safe to say many of them are just as broken up as the frozen treats normally were by the time you opened one up for yourself.

I wasn't convinced that we were on the darkest timeline imaginable until I saw that the Choco Taco is being discontinue by Klondike. It's over, man.

It’s come to my attention that they have discontinued the choco taco, I may have to resort to violence

Hey @Klondikebar there are bad decisions, like getting a face tattoo or french kissing an alligator, then there are horrifically bad inexcusable decisions like discontinuing the Choco Taco.#sayitaintso #savethechocotaco

Apropos of nothing, here’s a link to a page featuring a wide variety of ways you can get in touch with the people who made the decision to discontinue the Choco Taco.