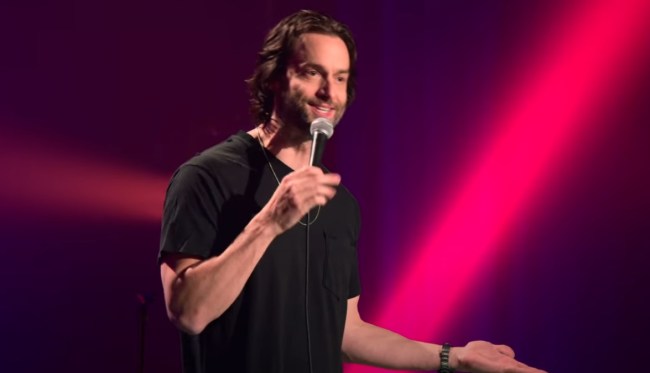 I’ve never liked Chris D’Elia, even before all of these abhorrent reports of his disgusting predatory behavior. He always struck me as a douchebag and a try-hard, especially considering he dresses like he’s an 18-year-old high school senior hype beast. In fact, as far as I can remember, D’Elia initially blew up because Justin Bieber said he was his favorite stand-up comedian, which really tells you everything you need to know about the dude. Most of all, his brand of comedy just isn’t all that great.

As it, unfortunately, turns out, my initial distaste of D’Elia proved to be predictory, as it’s now been revealed that the guy is a shameless pervert… and I’ve got a feeling it’s still going to get a whole lot worse for him.

Now that everyone knows the truth about the 40-year-old D’Elia — for example, I’ve never seen Netflix’s You, but apparently he plays a predator on that show, too (and also a pedophile on Workaholics, what the hell?) — his history and comedy is being recontextualized, as you can see in this recently unearthed clip that shows his cartoonish face devolve into a panic when he realized Snapchat photos, videos, and messages can be saved.

Look closely: as everyone else is chatting about the story at hand (a high school teacher sending nudes to her 15-year-old student), you can see D’Elia’s brain desperately trying to calculate how this person got caught and if it could also happen to him. While everyone else is discussing the details of the story at hand, he’s fixated on figuring out how this story even came to light in the first place. I wonder why…

“But hold on…. I thought snapchats went away?” 😭😂😂 pic.twitter.com/M2b4XHPCks

When I said “cartoonish face”, I meant that quite literally, as his eyebrow goes full Jim Carrey-mode when he realizes that his empire of predatory grooming was built on a house of easily-discoverable and saveable Snapchats. Disgusting. Good riddance, creep.