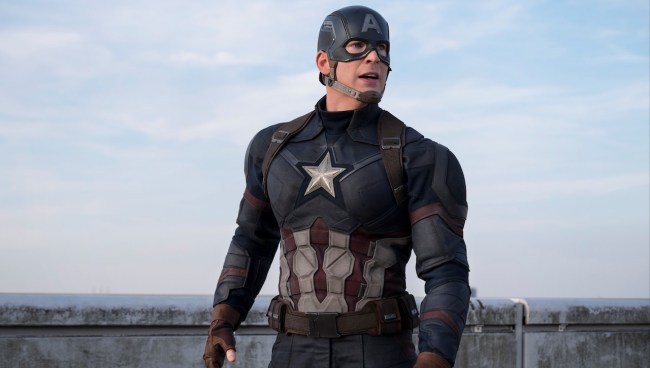 Here’s the thing about comic book movies: literally anything is possible. I’ve got a stack of comic books on my desk and you wouldn’t believe how significantly more insane these stories are than their cinematic counterparts. Old Man Logan, which is the graphic novel that the Academy Award-nominated Logan,  features a territory known as Hulkland run by a group of inbred bandits known as the Hulk Gang. Like I said, wild shit.

My point is that, in terms of insane things that theoretically could happen in a comic book movie, Chris Evans popping up as Spider-Man would be on the more tame end of the spectrum. Even if he hates the mask as much as he claims, they could get creative and toss him a roll in one of the Into The Spider-Verse movies.

“I love Captain America, but Spider-Man was my childhood hero. I would have loved doing scenes like attaching myself to the sides of buildings and trying to spring from one building to the next. ”

“But I would have hated to wear Spider-Man’s mask. I’m very claustrophobic, and I doubt whether I could have worn that kind of full suit and mask for hours a day on a set. I much prefer my Captain America outfit, which I think is cooler anyway!” [SCMP via ComicBook]

In all seriousness, though, while Evans appearing as Spider-Man will obviously never happen, will he ever return as Captain America? My guess is yes. Given the long-running rumors that Marvel Studios plans on adapting Secret Wars one day, there’s certainly a possible future where Evans could make a one-film appearance as an alternate-universe version of Steve Rodgers.