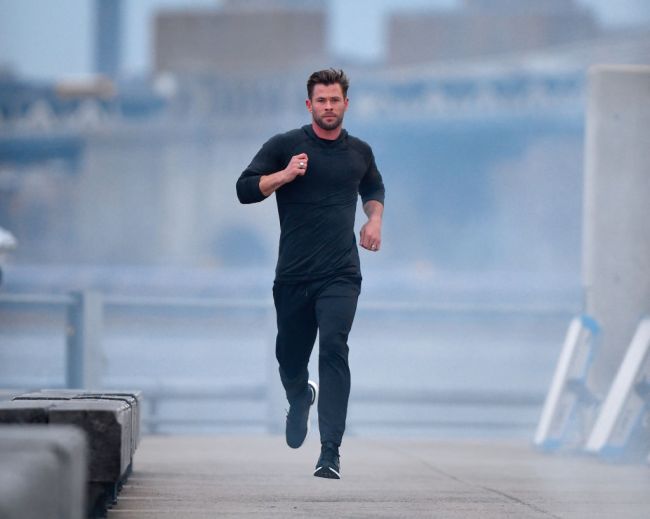 Chris Hemsworth has a sculpted physique and is in such tremendous shape that he can play the role of Norse superhero Thor. But to get the body required

Intermittent fasting focuses more on when you eat than what you eat. The popular diet technique cycles between periods of fasting and eating. There are different schedules, but a common intermittent fasting approach focuses on eating during an eight-hour window each day, and fasting the other 16 hours. There are other plans that recommend fasting for 24 hours two times a week.

Hemsworth dropped a lot for 2015’s In the Heart of the Sea, where he played a sailor after a shipwreck. Hemsworth, who was already in shape, had to get progressively thinner throughout the movie to appear like he was stranded without food.

RELATED: Chris Hemsworth Is Getting Trolled On Instagram For ‘Skipping Leg Day’

“He was so tired from all the training we couldn’t add any more workouts, so nutrition was a big deal,” Zocchi told Business Insider.

With more exercise not being an option, Hemsworth gave intermittent fasting a try.

“We implemented intermittent fasting, along with lower calories, and it was crazy how much that worked,” Zocchi added.

The actor ate all of his meals within an eight-hour time period.

“Everyone thinks of him in Thor, being big and muscly, but this was the big accomplishment for me. It was a huge challenge for us,” Zocchi said of getting Hemsworth trim for the role. “It’s a really good system to help lose weight. I always go back to that.”

Zocchi worked with Hemsworth to help him bulk up again for “Thor: Love And Thunder,” which comes out next year.

For his role as Thor in the upcoming Thor: Love and Thunder movie, Hemsworth teamed up with Zocchi to build muscle. To bulk up for the superhero role, Zocchi advised a calorie surplus with high-quality nutrition.

Hemsworth was downing a whopping 4,500-calories-a-day during his bulking plan for the film.

“People think things like protein shakes and creatine make a big difference, but that’s only about 5% of the equation,” Zocchi stated.

“It’s dialing in the basics and sticking to the program to get results,” Zocchi noted.

But Zocchi reminds people that not everyone will get the same results as Chris Hemsworth, even with a proper diet, lots of exercise, and intermittent fasting.

“Everyone’s body is different,” the celebrity workout trainer explained. “I do the same workouts as Chris and eat the same, and I don’t look like him.”