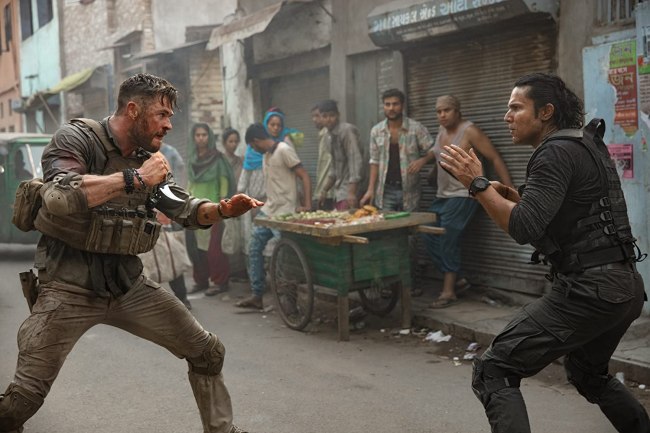 Given the release of The Matrix: Resurrections trailer, I’ve spent some time this week thinking about Keanu Reeves’ place in the history of action movie stars, as his core four entries — Point Break, Speed, The Matrix, and John Wick — is as strong as they come. Not only is he a first-ballot Hall of Famer, but an argument can now be made he’s the greatest action star of his generation. While Tom Cruise is certainly in the conversation, particularly given his sheer volume of action movies, I’m not sure his quality of franchise/film is quite as high. But that’s another discussion for another day.

My point is that as I was pondering an action movie star Hall of Fame, I came up with the following rough draft list of first-ballot entries:

Which then lead me to my next thought: who are the potential future Hall of Famers? Chris Hemsworth was one of those names (as was Vin Diesel, Dave Bautista, and Scarlett Johansson).

Obviously best known for his role as Thor, Hemsworth’s God of Thunder will become the first and only character (so far) to get a fourth solo film in the Marvel Cinematic Universe. That in and of itself, given the record-shattering nature of the MCU, is a future Hall of Famer-worthy accomplishment.

Hemsworth’s also got the Extraction franchise over on Netflix, which *could* turn into something special if the sequel manages to be better than the original. Don’t get me wrong, I really enjoyed the first Extraction, but if Hemsworth is going to start to put together a Hall of Fame resume, he needs to start building out an iconic character/franchise outside of the comforts of Marvel, and that begins with making Extraction a household name.

Originally released on April 24, 2020, Extraction broke all sorts of viewership records for Netflix, leading the streaming giant to greenlight a sequel almost immediately. And if Chris Hemsworth’s training for the role is any indication, Extraction 2 is going to be bigger and better than the first.

If you haven’t seen Extraction, go check it out on Netflix — it’s a mix of John Wick, The Raid, and a classic behind-enemy-lines story.